This article is the first careful look at the demographic makeup of law faculties compared to the larger pools of lawyers and the general public. It examines which racial, gender, religious, and political groups were the most under- and overrepresented in 1997 and in 2013 compared to persons of similar ages in larger pools, including the U.S. full-time working population and the U.S. lawyer population. 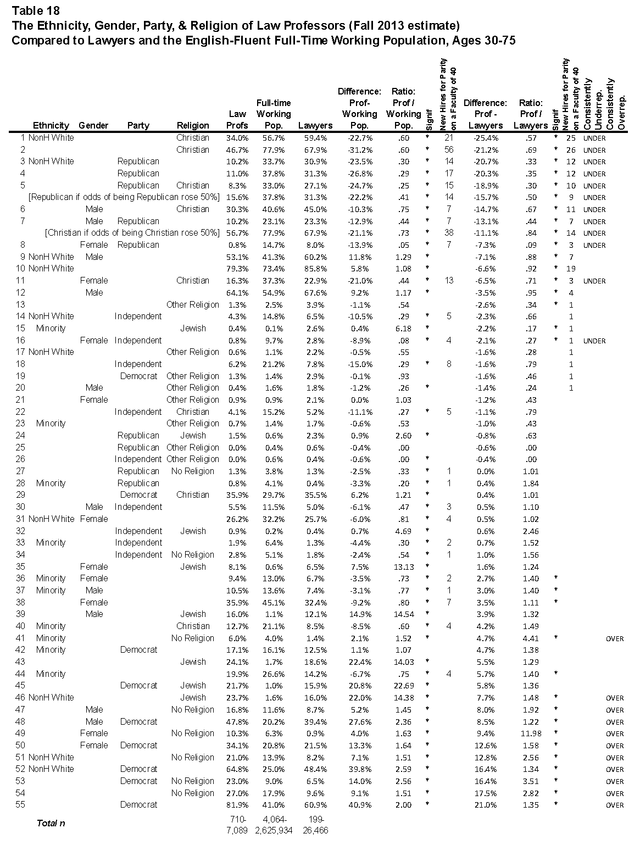 By some measures, in 1997 the most underrepresented racially defined groups were Non-Hispanic white Republicans and non-Hispanic white Protestants, the latter being pejoratively known as WASPs, the supposed dominant group. This pattern of representation in law teaching tends to show that diversity hiring and affirmative action hiring would point in different (but sometimes overlapping) directions—affirmative action hiring toward recruiting more women and minorities, diversity hiring toward recruiting more Republicans, Christians, and Latinas. Thus, in law school faculty hiring, diversity does not equal affirmative action; the diversity groups are not the same as the affirmative action groups. Further, hiring women and minorities of the sort usually hired will increase the variety of viewpoints on the left, but will make law faculties less representative of the political views of the general public.

In part because the underrepresentation of Christians and Republicans may be too large and too consistent to be simply the result of discrimination, culture probably also plays an important role. More generally, the central assumption of discrimination theory that statistical disparities are usually the result of discrimination is implicitly challenged by the patterns in law teaching. Last, this article is intended to illustrate that theoretical and normative questions can often be profitably explored by empirical work. Sometimes the facts get in the way of a theory in a way that normative arguments alone seldom do.

The main body of this article was written over several years from 1996 through 2000. When I got diverted in 2000 by a couple of time-sensitive projects, I put this manuscript aside. Yet this study continued to have an underground life and to be cited—in part because it remains the only survey of the political and religious affiliations of a representative sample of law professors. At the urging of others I recently decided to publish it. I have redone the significance testing in the tables of the 2000 manuscript, added some discussions of the tables, and made some relatively minor changes to the argument. Otherwise, the main body of this article remains as it was.

In an Afterword, I update the race and gender data on law faculty diversity, incorporating the most recent ABA release for the 2013-2014 academic year. The only large racial or gender groups that are now significantly underrepresented compared to the lawyer population of a similar age are non-Hispanic whites, males, and non-Hispanic white males. And by some measures the most overrepresented race and gender groups in law teaching compared to lawyers are minorities combined, African Americans, and females. Affirmative action has succeeded so thoroughly that, compared to lawyers, the largest underrepresented groups in law schools today are white Christians, Christians, white Republicans, and Republicans.

In terms of absolute numbers, the dominant group in law teaching today remains Democrats, both male and female. Because in the general public both white women and white men tend now to vote Republican, law faculties are probably less representative ideologically than they have been for several decades—a disappointing result after four decades of hiring intended to make law professors more representative of American society. ...

I am aware of only five law schools among the top 100 that now have percentages of Republican-leaning faculty that approach or exceed their percentages in the full-time working population (George Mason, Notre Dame, Pepperdine, Virginia, and Northwestern), though there may well be others. ...

Now that the important work of race and gender integration has succeeded on law school faculties—with the traditional affirmative action groups now matching or exceeding their percentages in the broader lawyer population—the next step should be to desegregate law schools politically.

This study finds that diversity hiring in law schools has been a great success, at least as to ethnicity and gender. All large traditional affirmative-action groups in law teaching are now at or above parity with full-time lawyers, and such groups as women, minorities, and minority women are significantly over-represented in law teaching compared to working lawyers. Indeed, the only ethnic and gender groups that are more than a half slot short of parity on a typical tenure-track faculty of about forty are non-Hispanic whites, males, and non-Hispanic white males, the groups typically thought of as over-represented.

If, however, a faculty were to do targeted hiring of only white males without firing any current faculty, they would need to hire seven white males on every faculty to reach parity. To reach parity for non-Hispanic whites overall, every law faculty of forty would have to hire nineteen whites. The third most under-represented group by absolute percentage differences is males overall (3.5% short of parity).

The only group it appears OK to stereotype is white, male Christians. Hope you realize how ignorant you sound, KennyG.

People who do not believe in climate change and who believe that dinosaurs roamed the earth 6000 years ago are primarily Christian Republicans. They are overrepresented in Republican Presidential debates and there are a fair percentage of them in the general society. They lack grounding in fact-based reality, however, and should not be law professors. So I do not worry if they are underrepresented amongst those imparting their vast wisdom to young people.

Morse - that is true for the older faculty members. The discrimination against white males for recent hires, however, has been blatant and consistent. And even the younger faculty members that you think are white male often have 1/8 native american or 1/4 hispanic blood that allows them to check a "diversity" box.

You can't throw a rock at a faculty meeting of almost any ABA law school without it hitting one white male after bouncing off another white male.

Also, if a Republican wants to be hired as a law professor these days, he can go to one of four or five Law Schools of True Significance and clerk for the D.C. Circuit or Supreme Court, just like everybody else.

These findings make a lot of sense. Law schools have been bending over backwards to mind more female and minority professors over the past two decades or so. And Christians and Republicans have been underrepresented my entire career.

I see. The problem with legal education isn't too few Christians. It's too many jews and atheists. Now it all makes sense! Perhaps there should be a campaign, (a crusade if you will), to purge the holy land of legal education from the christ-killers.

I miss the old days when conservatives used to favor hiring the most competent people, regardless of race, gender, religion or politics.

Jews and the non-religious are over-represented compared to lawyers.

Am I missing it or is socioeconomic class missing. When political party is included but not class, I suspect an agenda.

Perhaps a disproportionate share of While Male Republicans would generally rather practice law or work in finance, given the tremendous financial and geographic sacrifices entailed by law teaching.

are any religions over represented?