Hellwig Presents The Constitutional Nature of the U.S. Tax Court Today at Indiana 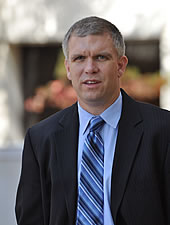 Brant Hellwig (Dean (as of July 1, 2015), Washington & Lee) presents The Constitutional Nature of the United States Tax Court at Indiana today as part of its Tax Policy Colloquium hosted by Leandra Lederman:

Is the United States Tax Court part of the Executive Branch of Government? One would expect that question would be capable of being definitively answered without considerable difficulty. And as recently expressed by the Court of Appeals for the District of Columbia Circuit, that indeed is the case. In the course of addressing a challenge to the ability of the President to remove a judge of the Tax Court for cause on separation of powers grounds, the D.C. Circuit rejected the premise that the removal power implicated two branches of government: “The Tax Court exercises Executive authority as part of the Executive Branch.” [Kuretski v. Commissioner]

This article will examine the Kuretski decision, using this case as a vehicle to examine the constitutional nature of the Tax Court.