Law school is falling out of favor with Americans, new data show. The decline has spurred programs to use strange survival tactics.

Law schools keep getting less attractive to young professionals, with schools receiving 6.7 percent fewer applications this year than they did in 2014, according to numbers released by the Law School Admission Council on Wednesday, March 19. The number of individuals applying has also fallen, by 4.7 percent. If the pace continues as it did last year, the number of people who applied to law school for the Fall 2015 semester will hit its lowest level in 15 years. 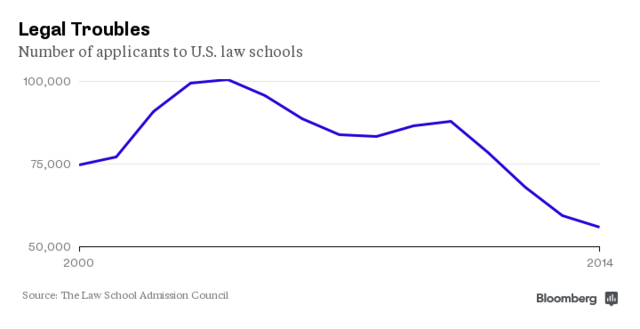 [W]aning interest in law school has become an increasingly urgent threat to the business model underlying legal education in the U.S. As legal jobs have dried up, fewer people are applying to and enrolling in law schools, spurring panic across the industry. To cope with the new reality, schools have arrived at innovative tactics to help fill their classrooms.

On Wednesday, Pace Law School in New York announced it would begin matching the tuition rate that out-of-state students received at their state schools, calling the program the first of its kind in the U.S. Dean David Yassky specifically cited declining enrollment across the country in an e-mailed statement explaining the new policy. Last month, the State University of New York-Buffalo Law School and the University of Iowa College of Law announced that they would not require the Law School Admission Test for applications from top-performing students from their undergraduate institutions. ...

A more straightforward tactic, favored by the vast majority of law schools, is simply to lower admissions standards across the board. Nine in 10 law schools have allowed LSAT scores of students in the bottom quartile to drop–meaning those whose scores are already the lowest of the class are getting even worse–according to a December Report by the nonprofit that creates part of the Bar Exam. Meanwhile, the employment rate for law grads fell for the sixth consecutive year in 2014, according to the National Association for Law Placement.

Now, of course, would be the perfect time to apply to law school. It’s just not a great time to graduate.