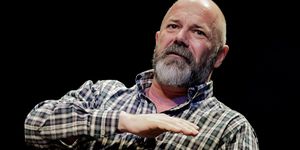 For years, Andrew Sullivan blogged at a prolific rate. ... "The truth is, I had to stop primarily because it was killing me," Sullivan said Sunday night at the 92nd Street Y in Manhattan. "I used to joke that if blogging does kill someone, I would be the first to find out."

He described the grueling pace that he maintained along with a small editorial staff. "This is 40 posts a day -- every 20 minutes, seven days a week" ...

On Sunday, while speaking to veteran journalist Jeff Greenfield, Sullivan said that the "crushing" workload was only part of what made his job so overwhelming. The experience, Sullivan said, was often dehumanizing.

Here's what I would say: I spent a decade of my life, spending around seven hours a day in intimate conversation with around 70,000 to 100,000 people every day, " Sullivan said. "And inevitably, for those seven hours or more, I was not spending time with any actual human being, with a face and a body and a mind and a soul."

Sullivan said the job resulted in lost friendships and minimal contact with his family. He said his husband, whom Sullivan married in 2007, called himself a "blog widow."

No longer tethered to his computer, Sullivan said he's resolved to exercise and meditate each day, and to get eight hours of sleep.