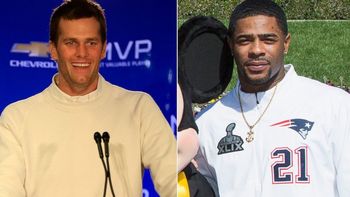 The world champion New England Patriots will celebrate with the city of Boston today in the now customary duck boat parade downtown.  It would be fitting if an IRS agent was waiting for quarterback Tom Brady at the end of the route.

Specifically, he might want to talk about Brady’s new truck.  You know, the 2015 Chevy Colorado he won as Super Bowl MVP. The same truck Brady wants to hand over to Patriots rookie cornerback Malcolm Butler, who won the Super Bowl on a last second interception.

According to ESPN, Brady has decided to gift the truck to Patriots rookie cornerback Malcolm Butler, who made the game-clinching interception on Sunday night.  This is not a taxable event at all for Butler–gifts are never taxed to the recipient.

Brady is not so lucky.  He’s going to have to pay gift tax on this transaction.  The tax code only allows you to give $14,000 tax free from any one person to any one person before assessing a donor level tax on the gift.

What about the Massachusetts income tax consequences (net of Federal deduction most of which would be diallowed under the Pease limitations on itemized deductions)?

I suspect the author didn't factor in splitting the gift to show the worst case scenario in order to gin up anti-tax/anti-IRS resentment.

Is it clear that Brady's transfer of the truck is a gift? It's not made out of love and disinterested generosity; the transfer arises in the context of a business relationship. The fact that Brady is not contractually obligated to transfer the truck is not determinative. Also, on the valuation issue, I wonder if Brady driving the truck around before transferring it might actually increase the value of the truck.

All Brady has to do is put a few miles on the truck and call it used. The value will drop by $10,000 and the if he splits the gift with his wife, there will be no gift tax issue. Besides, what kind of IRS agent is going to be a stickler about a gift like this?

The article is correct about the income tax consequence. As to the gift tax, Jim Maule is correct that if Brady's wife consents to a split gift, there will be a $28,000 exemption. Moreover, the $34,000 value for the truck is a retail value when purchased new from a dealer. Once the truck is in Brady's hands, it is arguable that the value should be discounted to some extent. Perhaps Brady should drive the truck for a couple of weeks before gifting it. There is one case allowing a discount.