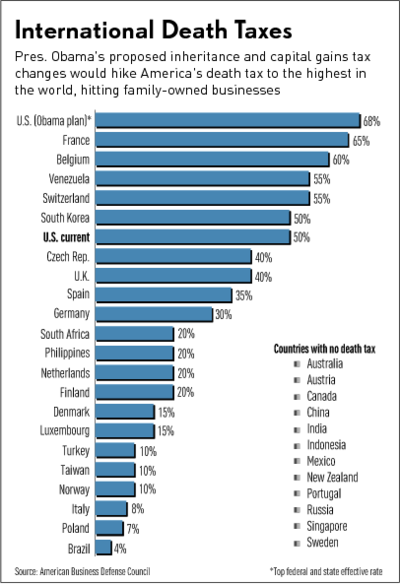 President Obama's proposed changes to inheritance and capital gains taxes could raise the estate tax rate in the U.S. to the highest in the industrialized world.

The plan, announced during the State of the Union address, would eliminate what is called "step-up basis at death" on capital gains taxation. And the top capital gains rate would jump to 28% from 20%.

Under current law, when a parent or grandparent dies, the increase in the valuation of his or her asset from when it was originally purchased is not taxed.

This is to offset the effects of the estate tax.

Obama's plan would tax estates and impose the regular capital gains tax on inherited assets — a business, property or stocks. This could bring the effective death tax rate to 57%, according to Dick Patten, chairman of the American Business Defense Council. Including state inheritance taxes, the rate would average 65% but could go as high as 68%.

Of 38 industrialized countries tracked by Ernst & Young, only Belgium would have a higher death tax, at 80%. But Belgium provides a lower 60% rate to immediate family members. Add in state estate taxes, and the U.S. would have the highest rate in the world.

This analysis is rubbish. Let's say a person earns income of $100k in their terminal year, and is taxed at 40 percent, leaving $60k. Their estate includes that $60k and is taxed on it. While the inheritance of the heirs relative to the income of the deceased implies a very high effective tax rate, there are two separate taxes at work (income and estate).
Similarly, capital gains tax and estate tax are separate. What if two people (A and B) own appreciated stock and both have intent to take gains. One sells their stock and dies a week later. One dies before selling. Why should the heir of the procrastinator be subsidised?
Note I am against the estate tax and would favour taxing capital gains at death (income- whether ordinary or capital appreciation should be taxed at least once).