New York Times:  Why Judges Tilt to the Right, by Adam Liptak:

Lawyers on average are much more liberal than the general population, a new study has found. [Adam Bonica (Stanford) & Maya Sen (Harvard), The Politics of Selecting the Bench from the Bar: The Legal Profession and Partisan Incentives to Politicize the Judiciary] But judges are more conservative than the average lawyer, to say nothing of the graduates of top law schools. 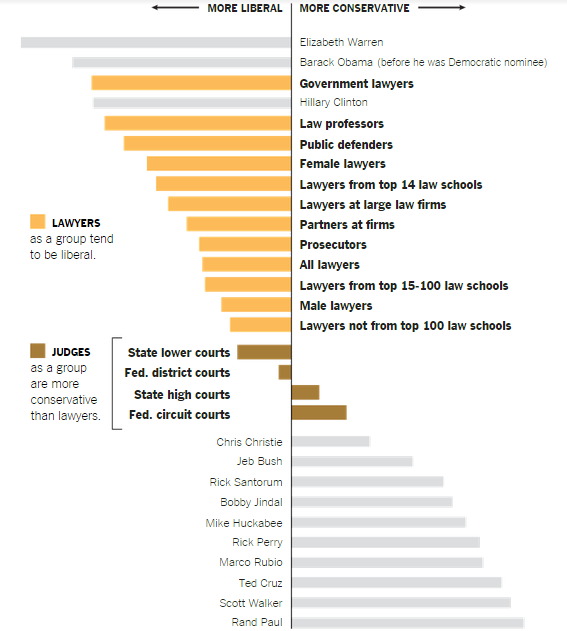 The study is based on an analysis of the campaign contributions of American lawyers, a group that turns out to be exceptionally active in the financial side of elections.

Of the 975,000 lawyers listed in 2012 in the Martindale-Hubbell legal directory, 43 percent had made contributions to state or federal candidates — including state judicial candidates — since 1979. That is about 10 times the rate of the voting-age population.

By examining candidate contributions and donors, as well as the causes some donors supported, the study devised a statistical algorithm that placed various groups of contributors across an ideological spectrum.

“The role of ideology increases as cases move up the judicial ladder,” said Lee Epstein, a law professor and political scientist at Washington University in St. Louis. “That’s because the constraints on judicial discretion lessen as one moves up.” She and two co-authors — William M. Landes, an economist at the University of Chicago, and Judge Richard A. Posner of the federal appeals court in Chicago — documented the trend in a 2013 book, “The Behavior of Federal Judges.” ...

Law professors, too, are quite likely to lean left, a finding that matched those in earlier studies. Indeed, when Professor Posner and a colleague, Adam S. Chilton, tried to assess whether the liberal tilt of the legal academy affected its scholarship, they had a hard time finding law professors at the top 14 law schools who had contributed more to Republican candidates than to Democratic ones.  [An Empirical Study of Political Bias in Legal Scholarship]

Judges lean to the right, amongst lawyers, who lean left. Judges are not right of the general population.