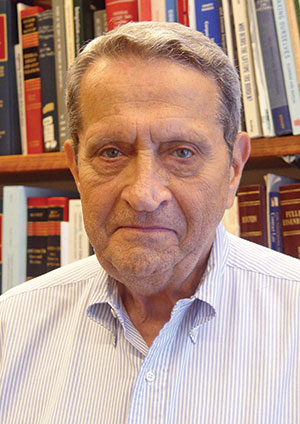 Columbia Law School Professor Emeritus Marvin A. Chirelstein, a leading scholar of federal taxation, corporate law, and contracts whose textbooks are still used by students across the country, died on Feb. 16. He was 86.

Chirelstein first joined Columbia Law School in 1954 to work on the Federal Income Tax Project under Dean William C. Warren. He then joined the government as an attorney in the U.S. Department of the Treasury and later taught at Rutgers School of Law and Yale Law School. Chirelstein returned to Columbia Law School as a visiting professor in 1981 and became a full-time faculty member in 1984. Two years later, he was named the first Isidor and Seville Sulzbacher Professor of Law, an appointment announced by then-Columbia University President Michael I. Sovern ’55.

In addition to being a highly sought after academic expert on taxation, contracts, and corporate law, Chirelstein was a beloved professor who once taught a seminar on the legal side of one of his favorite sports: boxing. A music lover who played the violin, he was known for his dry sense of humor and quiet wit and was adored by students. Two of his textbooks, Concepts and Case Analysis in the Law of Contracts and Federal Income Taxation: A Law Student’s Guide to the Leading Cases and Concepts, have guided generations of future lawyers through the complexities of the law. A third, Cases and Materials on Corporate Finance, opened the way to interdisciplinary analysis of corporate law.

“For his students, Marvin made tax both fun and funny,” said Alex Raskolnikov, the Wilbur H. Friedman Professor of Tax and co-chair of the Charles Evans Gerber Transactional Studies Center. “To his colleagues, he offered warmth, insight, and an endless list of experiences to learn from. I will miss Marvin very much.” ...

Teaching was Chirelstein’s passion, in addition to tax. With the exception of a year working for the government and two brief stints in private practice, Chirelstein spent his career in academia. He told the Columbia Law School News in 1984 that he considered himself “an educator at heart.”

As a professor at Yale Law School from 1965 to 1981, Chirelstein taught three of his future fellow Columbia Law School faculty members: John C. Coffee Jr., Merritt B. Fox, and Ronald J. Gilson. He also taught future U.S. President Bill Clinton, who wrote in his 2004 autobiography that Chirelstein once caught him reading Gabriel García Márquez’s One Hundred Years of Solitude during class. ...

He is survived by his wife, Ellen, and his son, Paul.

He taught Bill Clinton tax and helped him get into law school teaching.  Elena Kagan once told him his book got her through her law school income tax class.  He knew everything about the history of boxing and baseball, seemed to have the complete works of Gerard Manley Hopkins committed to memory, and enjoyed playing in string quartets.  His "little book" about the income tax has had a deep  influence on generations of law students, and an even deeper influence  on their teachers.  He cared passionately about the integrity of the income tax, and he continued to defend it long after his official retirement.  He wrote in an unmistakable voice, with clarity, grace, and wit (and not just about tax--take a look at his last essay, Bork, Dworkin, and the Constitution, 17 Green Bag 2d 17 (2013)).  He belongs on the short list of funniest law professors of all time (despite, or perhaps because of, his almost never cracking a smile).  And underneath a somewhat gruff exterior, he was one of the kindest persons I have ever known.

Marvin was one of the finalists for the Tax Prof Mount Rushmore.

I was lucky enough to take Marvin's Corporate Finance class, which changed everything. I still have my casebook and notebook from that class, 37 years later. He was a great supporter of young lawyers and young law professors. A beautiful writer. Funny as hell in front of the lecture hall. And a professional bridge from Bittker to Zelenak. So long to a great one.

May he be granted eternal rest.
His soft cover guide to federal income taxation was not only a practical study aid, I believe it actually served to whet the appetites of many law students to consider a career in tax law.
And to me it is not surprisng at all that a gent with a funny bone whose interests include boxing and the violin would be a tax scholar. It is exactly what I would have expected!

Within one week two of my three favorite law school professors have died -- Harvey Goldschmid and Marvin Chirelstein. Along with the late Louis Henkin, they made studying law a real treat and privilege.

I think he was the model for half the tax professors of our generation, including me. Except he was actually funny. Big loss.