When the robber barons accumulated fortunes that made European princes envious, the combination of their own philanthropy, their children’s extravagance and federal trust-busting meant that Americans never discovered what it would be like to live in a country where the elite could reliably reproduce themselves. Now they are beginning to find out, because today’s rich increasingly pass on to their children an asset that cannot be frittered away in a few nights at a casino. It is far more useful than wealth, and invulnerable to inheritance tax. It is brains.

Intellectual capital drives the knowledge economy, so those who have lots of it get a fat slice of the pie. And it is increasingly heritable. Far more than in previous generations, clever, successful men marry clever, successful women. Such “assortative mating” increases inequality by 25%, by one estimate, since two-degree households typically enjoy two large incomes. Power couples conceive bright children and bring them up in stable homes—only 9% of college-educated mothers who give birth each year are unmarried, compared with 61% of high-school dropouts. They stimulate them relentlessly: children of professionals hear 32m more words by the age of four than those of parents on welfare. They move to pricey neighbourhoods with good schools, spend a packet on flute lessons and pull strings to get junior into a top-notch college. 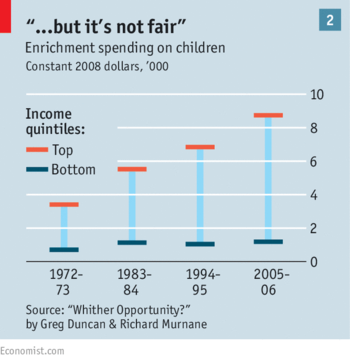 The universities that mould the American elite seek out talented recruits from all backgrounds, and clever poor children who make it to the Ivy League may have their fees waived entirely. But middle-class students have to rack up huge debts to attend college, especially if they want a post-graduate degree, which many desirable jobs now require. The link between parental income and a child’s academic success has grown stronger, as clever people become richer and splash out on their daughter’s Mandarin tutor, and education matters more than it used to, because the demand for brainpower has soared. A young college graduate earns 63% more than a high-school graduate if both work full-time—and the high-school graduate is much less likely to work at all. For those at the top of the pile, moving straight from the best universities into the best jobs, the potential rewards are greater than they have ever been. ...

The solution is not to discourage rich people from investing in their children, but to do a lot more to help clever kids who failed to pick posh parents. The moment to start is in early childhood, when the brain is most malleable and the right kind of stimulation has the largest effect. There is no substitute for parents who talk and read to their babies, but good nurseries can help, especially for the most struggling families; and America scores poorly by international standards (see article). Improving early child care in the poorest American neighbourhoods yields returns of ten to one or more; few other government investments pay off so handsomely. ... 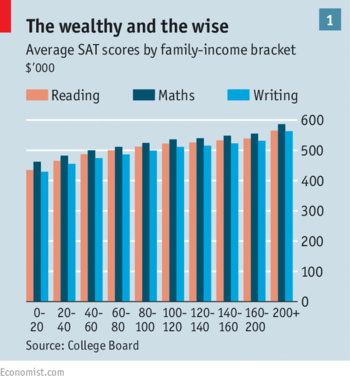 America’s universities need an injection of meritocracy. Only a handful, such as Caltech, admit applicants solely on academic merit. All should. And colleges should make more effort to offer value for money. With cheaper online courses gaining momentum, traditional institutions must cut costs or perish. The state can help by demanding more transparency from universities about the return that graduates earn on their degrees.

Loosening the link between birth and success would make America richer—far too much talent is currently wasted. It might also make the nation more cohesive. If Americans suspect that the game is rigged, they may be tempted to vote for demagogues of the right or left—especially if the grown-up alternative is another Clinton or yet another Bush.

The Economist, An Hereditary Meritocracy:  The Children of the Rich and Powerful Are Increasingly Well Suited to Earning Wealth and Power Themselves. That’s a Problem.

Some self-perpetuation by elites is unavoidable; the children of America’s top dogs benefit from nepotism just as those in all other societies do. But something else is now afoot. More than ever before, America’s elite is producing children who not only get ahead, but deserve to do so: they meet the standards of meritocracy better than their peers, and are thus worthy of the status they inherit.

This calls for a shout-out to Herrnstein and Murray, whose '94 book, The Bell Curve, was all about exactly this phenomenon.

This same point was made in 1994 by The Bell Curve: Intelligence and Class Structure in American Life, by Richard J. Herrnstein and Charles Murray.

Perhaps a more direct way to address the inequality created by assortative mating would be for the State to assign spouses randomly.

First: put public schools back into local control - eliminate state and federal boards of education; two bury teachers' unions and put a stake through their hearts - ditto affirmation action; three: eliminate federal handouts to all school, including funding for research; encourage trustees of private and public schools to admit students on the basis of academic merit only - no legacies; four: local school boards should be made up of only those who have no connection to public schools - no relatives of teachers or administrators and public school teachers should be on probation for five years or until they can prove they know how to teach children how to become contributors to the general weal, i.e., know the three 'r's' including history, civics, geography, grammar (including how to pronounce work and speak in sentences), science, poetry, art, music, etc. and are also taught good manners, sports, etc.

We already know how to do this. It was in fact how schools were before the fascists took over in the 60's

If we converted to full socialism, there would no longer be any incentives to succeed. Then nobody's kids would take honors classes, try to get into good schools, go into "difficult" professions or make a lot of money. That would solve the problem, no? (For those of you who haven't had your coffee yet, this is a sarcastic comment. :)

In 1996's "The Millionaire Next Door", Stanley and Danko found that most American fortunes don't last three generations: one to make it, the next to maintain it, and the last to lose it. There are exceptions but the pattern appears to hold true.

Helping smart poor kids get into the meritocratic club sounds good, but would just increase the problem down the line. The problem isn't mating, it's that some kids aren't smart. We need to make all the kids smart. That starts as a question of biology, more specifically genetics. Once you fix that, then throw social programs at the rest of the issue.

Also recognize that the robots are going to take over the smart kids jobs, too. We're all screwed in the end. Invest in robotics companies?

The assertion that early childhood education yields benefits of 10:1 is at variance with the numerous studies that show Head Start to be worthless. And the number of undeserving but family connected who end up at Ivy League schools is miniscule compared to the total enrollment.

This phenomenon, of course, can have nothing to do with legacy preferences, elite colleges and universities recruiting athletes primarily for sports like rowing, golf, sailing, polo, lacrosse, and other favored pastimes of the upper classes and their prep schools, SAT scores (which correlate to nothing so much as household income), preference for a resume full of AP and IB courses (wealthier school districts offer far more), the 5-8% of entering classes who are "development cases" (read: the kids are unqualified but the parents are UHNWs), the continuing centuries-old backroom relationship between certain Ivy schools and certain feeder prep & boarding schools, the favor with which students who have had grand tours or international public service stints are bestowed, etc et al. Outside of a few notable exceptions: MIT, Caltech, a few others - the admissions process rewards wealth with every step. Chuck the neo-eugenics pseudoscience of Charles Murray or Amy Chua, whose works has been ripped apart by virtually every critic, and read Pulitzer Prize-winning WSJ journalist Daniel Golden's "The Price of Admissions," Berkeley sociologist Jerome Karabel's "The Chosen," or Yale professor William Deresiewicz's "Excellent Sheep." When schools like Princeton fill 40% of their classes with legacies, recruited athletes, children of faculty, development cases, etc., it isn't exactly a pure meritocracy.

". The moment to start is in early childhood, when the brain is most malleable and the right kind of stimulation has the largest effect. There is no substitute for parents who talk and read to their babies, but good nurseries can help, especially for the most struggling families; and America scores poorly by international standards (see article). Improving early child care in the poorest American neighbourhoods yields returns of ten to one or more; few other government investments pay off so handsomely..."
But other studies regarding Head Start (which this article seems to be referencing) indicate that it does not pay off. Perhaps I am misunderstanding what Caron is discussing here?

Note that the dire sequence in the article only happens OTBE (Other Things Being Equal) I would point out that OTBE is failing even as we post. There are now large and persistent programs to locate genetic sources of intelligence that are beginning to show results. There are in use today genetic engineering procedures being applied to humans. At the same time, genetic technology is getting cheaper, not more expensive. The FDA can only hold up progress so long. So the "assortative mating" problem is subsumed by the ease and cheapness of changing the genomes of embryos, or even gametes.

Another place where OTBE fails is education. Even as they raise their prices to hire more administrators, colleges are giving less and less benefit. The public schools that do not nurture fast learning children are being replaced by not only homeschooling but by a proliferation of online basic environments that grow in sophistication every year. I'd love to see what Kahn Academy can do with the Occulus Rift and its competitors.

Lastly, the formerly huge impact of colleges where networking gives later advantages is being caught up to by online social networking. Already, services like "linked In" are beginning to show what interest-focused networks can do. This will only get more pervasive as the tech improves.

For the next 10-15 years this article has some predictive capabilities, but as OTBE fails ever more completely, its predicted aristocracy will fade into the mists of time.

People are conflating credentials with intelligence. All one has to do to become part of the elite is to graduate from the 'right' schools and network with the children of the existing elite attending such schools. Of course if your parents themselves are graduates from the 'right' schools it much, much easier to get in those schools than some middle class smuck. It has more to do with cunning than raw intelligence.

It takes continual attention to raise kids like this. The author has no idea. Even then, there is a lot luck involved. There is also the influence of culture which has to be counteracted every day and in almost every way. A lot of self-destructive messages are communicated through the media. I know. I am the mother of high achieving kids.

This calls for a shout-out to Mike Judge, whose 2006 movie, "Idiocracy," was all about exactly this phenomenon.