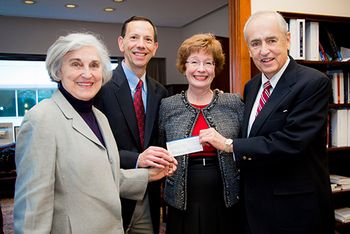 The Carneys' gift will allow the center to hire an assistant director and to enhance both its experiential programs and academic offerings. When the law school has raised $1 million in matching funds, it will establish the William and Jane Carney Chair of Transactional Law and Practice, to be held by the center's executive director.

The gift is one of the largest named gifts from a professor ever given to Emory University. ...

"Carney has been among the leading professors teaching corporate and securities law for decades," says Emory Law Vice Dean Robert Ahdieh, who serves on the center's faculty. "But he has also always been committed to the idea that transactional lawyers need rigorous skills training."

Carney's experience in transactional practice served him well in academia, Ahdieh says. He is an interdisciplinary scholar who has explored the interconnections of law and economics.

Carney retired in 2012, after teaching 36 years at Emory Law. He is the author of two leading casebooks, one on corporate finance and another on mergers and acquisitions. A 1962 graduate of Yale Law School, he worked in private practice before accepting his first teaching job at the University of Wyoming in 1973. He also has taught in Belgium, Germany and Russia.

What's really amazing is that a law professor could earn so much money that he can afford to give away $1 million!

Holy cow! That is amazing! A Law professor retired.