New York Times, Middle Class Shrinks Further as More Fall Out Instead of Climbing Up:

The middle class that President Obama identified in his State of the Union speech last week as the foundation of the American economy has been shrinking for almost half a century.

In the late 1960s, more than half of the households in the United States were squarely in the middle, earning, in today’s dollars, $35,000 to $100,000 a year. Few people noticed or cared as the size of that group began to fall, because the shift was primarily caused by more Americans climbing the economic ladder into upper-income brackets.

But since 2000, the middle-class share of households has continued to narrow, the main reason being that more people have fallen to the bottom. At the same time, fewer of those in this group fit the traditional image of a married couple with children at home, a gap increasingly filled by the elderly. 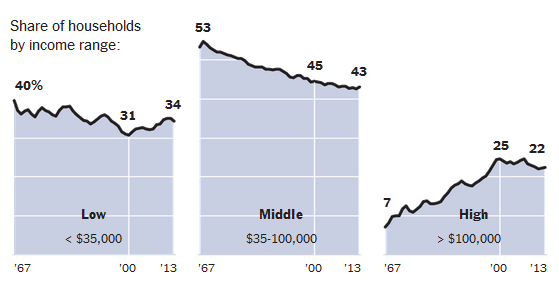 The middle class, if defined as households making between $35,000 and $100,000 a year, shrank in the final decades of the 20th century. For a welcome reason, though: More Americans moved up into what might be considered the upper middle class or the affluent. Since 2000, the middle class has been shrinking for a decidedly more alarming reason: Incomes have fallen.

Here, we walk through the trends in some detail.

Paul -- I'm not sure the headline to your post is correct. According to the interactive versions of the charts linked in the Times article, the share of the population in the middle-income range was 43% in 2009 (the first year of the Obama Administration) and 43% in 2013 (the most recent year for which figures are available). Although the Times article correctly notes that the middle class has shrunk since 2000, there does not appear to be evidence that the trend has been continuing since 2009. In fact, the preliminary evidence appears to indicate that the trend might be reversing (the share of the population classified as lower-income has dropped 1% point since 2010 according to the interactive charts).

Nevermind. They are complaining about the last 10 years, not the last 50+ years.

Did I miss something?