Buried deep in American companies’ securities filings is an indicator for how aggressively they are working to shield their income from the IRS and other tax authorities.

The obscure entry—under the heading “uncertain tax positions” or “unrecognized tax benefits”—is where companies account for tax breaks that push the envelope. And they are adding up. 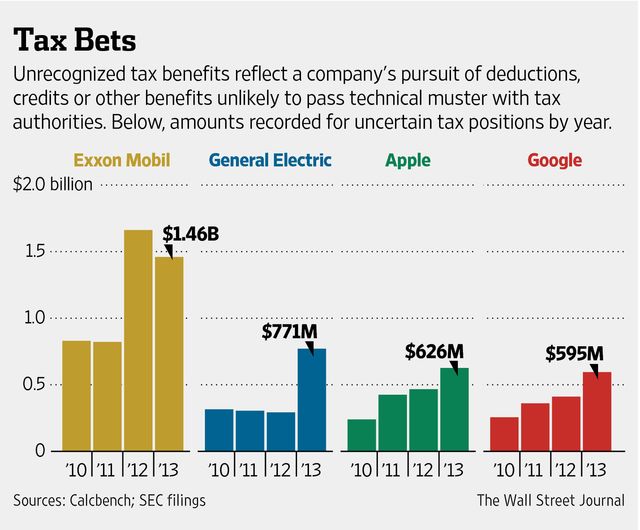 All told, companies in the S&P 500 had amassed $188 billion in unrecognized tax benefits by the end of their 2013 fiscal years—$21 billion of which was related to that year’s taxes, according a Wall Street Journal analysis of figures from Calcbench Inc., a financial data provider. The companies have added between $19 billion and $22 billion of new uncertain tax positions each year since 2010.

Accounting rules define these tax benefits as ones that tax authorities have strong grounds to reject, by the companies’ own analysis. Seeking those breaks is perfectly legal, and since companies have already lowered their profit numbers as if the taxes had been paid, there’s little risk in rolling the dice. A win down the road will boost profits, while a loss typically does no additional damage. Either way, companies often get to use the disputed cash in the meantime. ...

Some tax professionals call it the “audit lottery.” At stake are billions of dollars that may never find their way into the government’s coffers at a time when companies’ contribution to overall income-tax revenues is running low by historical standards.

Recording an "uncertain tax position" is the opposite of "playing the audit lottery." The former requires analysis and gives the auditor a road map to the issue. The latter means not recording a potential liability at all - just the benefit.

The WSJ writer should have clarified the difference.

I think the biggest issue here is intangibles It's just so easy to move them I think we need a whole new approach to taxing this kind of company Calling Dr. Kleinbard!