NY Times op-ed: Why I Am Renouncing My U.S. Citizenship

New York Times op-ed:  Why I’m Giving Up My Passport, by Jonathan Tepper: 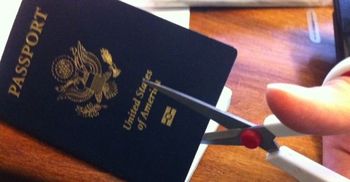 My “in-person final loss of citizenship appointment” is scheduled for Jan. 14 at the United States Consulate here. My British passport, acquired in 2012, will be my only one.

Some 3,000 Americans gave up their citizenship last year, a tiny number that’s nevertheless been soaring. Yes, a few expatriates may be trying to avoid future taxes. ... But most, like me, are not tycoons. We’re responding to the burden and cost of onerous financial reporting and tax filing requirements that are neither fair nor just. ...

Some 7.6 million Americans live abroad — expats would be the 13th most populous state, if we were a state. Many are overseas temporarily, for work or study. But many others marry foreigners, start companies or have long-term overseas assignments. We are just like ordinary Americans — except that we lack representation.

The United States is an outlier: Its extraterritorial tax laws apply to American citizens and companies no matter where they are. We are the only country (except, arguably, Eritrea) that taxes all of its citizens on worldwide income rather than where the income is earned. Expatriate Americans have to pay taxes once, wherever they live, and then file again in the United States.

The IRS doesn’t tax the first $97,600 of foreign earnings, and usually doesn’t double-tax the same income. So most expatriates owe no money to the I.R.S. each year — and yet many of us have to pay thousands of dollars to accountants because the rules are so hard to follow.

The extraterritorial reach of the income tax dates from the Civil War, when the government wanted to prevent Americans from fleeing to Britain to avoid taxes. This outdated and harmful relic has only gotten worse. ...

The challenges facing expat Americans abroad would disappear if the United States taxed and regulated only those who lived in America. Sadly, American politicians don’t care about Americans living abroad. It is easier to demonize us as tax dodgers than to fix irrational policies that no longer make sense in an interconnected world. The founders agreed on “no taxation without representation.” Why can’t Congress?

You do have representation because you can VOTE, even from overseas.

I'm sure Jonathan Tepper is a good egg, but Congress has omelets to make.