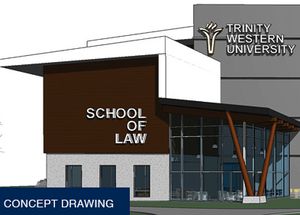 Both the Law Society of British Columbia and the BC Ministry of Advanced Education originally approved TWU’s School of Law. “We have no choice but to proceed legally,” said Bob Kuhn, President of Trinity Western. “By prejudging our future law graduates not on their qualifications but the Community Covenant they agree to abide by while students at TWU, the Law Society has infringed on the human rights of TWU and its students.”

The Law Society’s decision to rescind its prior approval was not grounded on the quality of the TWU academic program, but rather was based on TWU’s religious view of marriage. Members of the TWU community observe a set of Christian behavioural standards that affirm sexual intimacy as belonging within the bounds of traditional marriage between a man and a woman. However, as Kuhn pointed out, "The Supreme Court ruled in its 2001 decision involving approval of the TWU education program that, just as is the case with respect to the law school, there is no evidence whatsoever to suggest that the religious views of TWU graduates lessen their competence to practice their profession in Canada’s pluralistic society.”

“What many critics overlook is that our Community Covenant says that all students and faculty are to love and respect other people,” Kuhn said, “regardless of their background or personal characteristics. TWU is a community of diversity and acceptance. This campus is a Christian home for four thousand students with an array of opinions and beliefs.”

The problem with the Canadian approach is that all law schools have ethical rules of one kind or another. In our law school, it would clearly be inappropriate to go topless, and almost as inappropriate to date a female student (topless or otherwise). These are essentially moral or ethical rules, and might (especially the second) be different in another society: we just see them as normative because we are so used to them. Canada is simply punishing a school for practicing a religion that is different from the mainstream. Merry Christmas!