Average American's Wealth Down 40% Since 2007, Inequality Has Widened Across Racial Lines

The Great Recession, fueled by the crises in the housing and financial markets, was universally hard on the net worth of American families. But even as the economic recovery has begun to mend asset prices, not all households have benefited alike, and wealth inequality has widened along racial and ethnic lines. 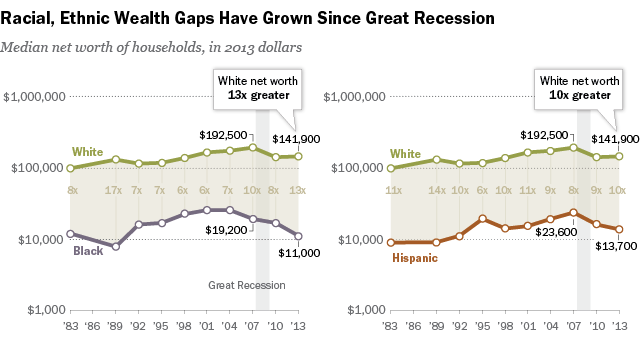 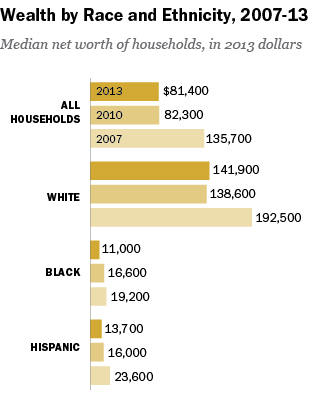 The current gap between blacks and whites has reached its highest point since 1989, when whites had 17 times the wealth of black households. The current white-to-Hispanic wealth ratio has reached a level not seen since 2001. ...

Leaving aside race and ethnicity, the net worth of American families overall — the difference between the values of their assets and liabilities — held steady during the economic recovery. The typical household had a net worth of $81,400 in 2013, according to the Fed’s survey — almost the same as what it was in 2010, when the median net worth of U.S. households was $82,300 (values expressed in 2013 dollars). A new model of government is emerging in response to concentrated wealth and power -- that it is a redistributive engine that takes away from the wealthy and the crony capitalists to the lower classes. Correctly done, this recycles wealth and creates a virtuous cycle in a booming economy. Instead, what we have here is increasing concentration of wealth, and power by people willing and able to use it to their financial ends. Too many citizens are operating on out of date views of government as a modern leviathan more appropriate for the 1970s and overlooking the power and wealth concentrations that threaten to usurp government in the early 21st century.

If you ask me, this could very explain the unrest that has been burgeoning from black communities in places like Ferguson far more than anything else.

Thanks Paul, as always, for the extent of great work you do, including this story.

I'm with Dale on Ralph's comment, the first one. The Federal Reserve has created a financial bubble, for political purposes, that will end under the watch of the next administration and will have a devastating "trickle down" effect on people who didn't even benefit from the phantom growth.

I'm glad to see the comments about the Federal Reserve's impact on economic inequality, i.e., flooding Wall Street with trillions of dollars. This is an issue that deserves more attention by the mainstream media.

Presented with this information, ninety-five percent of black voters would still go for Obama and the Democrats. Bush is blame, you know, and statistics that show Obama failures are racist.

The Great Recession, fueled by the exporting of our manufacturing sector and the abandonment of the production role, is not over and won't be over for a long time.

When all the pundits were touting NAFTA and other redistribution agreements, they promised us prosperity, jobs, and massive exports. Now that their promises have fallen through, they're reduced to "cooling the mark," i.e., placating the victims of their con game.

Economic growth isn't likely now, because there's nothing left here to grow. Our factories, jobs, and productive capital are in other countries, growing there. We produce little, we consume much, and we borrow to cover the difference.

Our economy is dominated by an externality : we have a "produce in China, sell in the West" policy (as Pravda labeled it). That's good for corporations' profits, and it's good for the consumer's access to cheap goods. But it crushes the middle class, would-be factory workers, and the economy at large.

And so the progressive project progresses, as it has always done.

Since money is blind to skin color, instead of being so quick to blame race, it would be far more productive to look at personal behavior. I see one comment that states “Federal Reserve policies to inflate asset prices (real estate, stock market) have likely disproportionately benefited affluent whites.” This tacit admission that our own government has inflated the value of assets that tend to held, not by Caucasians and Asians, but by people who tend to follow the proven habits of successful people, one of which is to save for the future. One such person is Oprah,who plowed her income into her own media empire. She is one of the most wealthy women in America.

This distinction starts early in life. My wife, who works with young women, sees a lot of expensive shoes, jeans and smartphones being owned by youth who have almost no money. These people will grow up to consume their incomes rather than to invest it. Their self-selection has nothing to do with what color their skin is.

The hidden elephant in the room is that we give the Federal Reserve a pass on the social effects of their policies. There wouldn't be any assets that are disproportionately inflated in value where it not for deliberate government policy.

I'm no socialist, but this isn't going to end well.

The economy doesn't need large percentage of the population for labor.

The gap will continue to widen and this will lead to social unrest.

All we hear about are a couple random officer shootings while the media is silent on this. I've realized it is a bargain that most American's are all too happy to make.

Federal Reserve policies to inflate asset prices (real estate, stock market) have likely disproportionately benefited affluent whites. It is interesting that the last time the gap was large was in 1989, just before a stock market crash. Also, I would be interested to have a breakdown not by race but by class (a la Joel Kotkin.) I suspect there is a white underclass who has been completely left behind thanks to the current policy's toxic mix of stagnating wage growth and rising asset prices (in which they do not participate.) Showing only racial differences may tell only part of the story. Thanks.