For those at the very top 2010 will be remembered as a very good year. While most Americans struggled to recover from the worst economic collapse since the Great Depression, top incomes soared while tax burdens for those incomes fell. 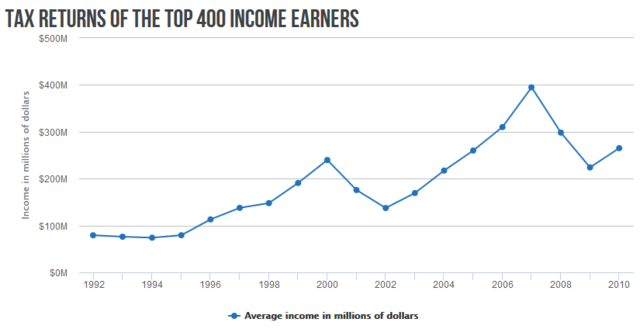 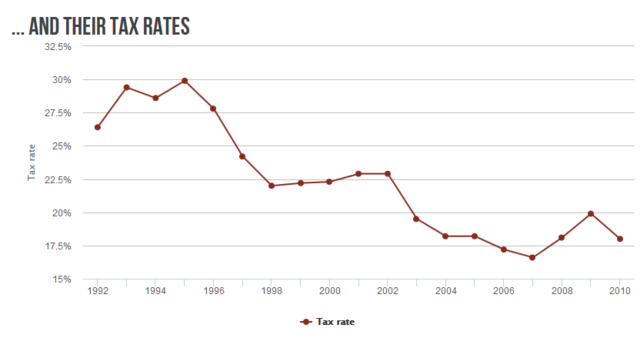 The top 400 taxpayers in the U.S. paid an average tax rate of 18 percent in 2010, the lowest since 2007, according to Internal Revenue Service data released today. ...

The data show the highest-income U.S. households rebounding from the recession in 2009. The minimum adjusted gross income needed for the exclusive list rose 28 percent, to $99.1 million, and the average income of those on the list reached $265 million.

The IRS data offer a glimpse into the finances of the wealthiest U.S. households, who now receive more than twice the share of national income than they did in 1995. These taxpayers had 1.31 percent of all adjusted gross income in the U.S. in 2010 and paid 2.01 percent of the income taxes, though they make up less than 0.001 percent of the population, according to the IRS.

Shown below are four tables that contain information from the 400 individual income tax returns with the highest adjusted gross incomes (AGIs), for years 1992 through 2010. Statistics for 2010 are included for the first time. It is important to note that the group of taxpayers whose returns are among those with the highest AGIs changes from year to year. Statistics on the persistence of taxpayers in that group are provided in Table 4.

Table 1 contains frequencies, money amounts, and average dollar amounts for the major income, deduction, and tax credits reported as part of the Form 1040 (U.S. individual Income Tax Return). It includes salaries and wages, interest income and capital gains. It also shows net income and net losses for returns with income from (1) businesses including farms, and (2) partnerships and S corporations. Itemized deductions categories include taxes paid, interest paid and charitable contributions. In addition, the table presents several credit items including the foreign tax and general business credits, as well as data for the tentative research credit. 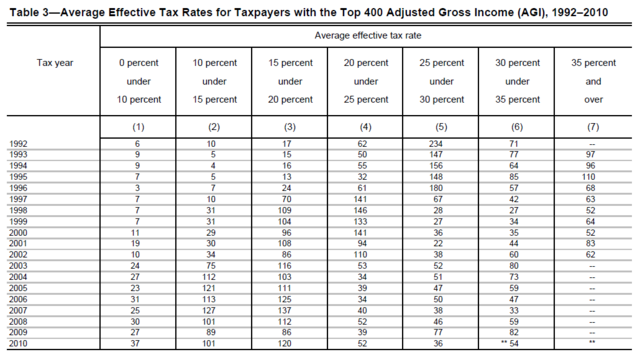 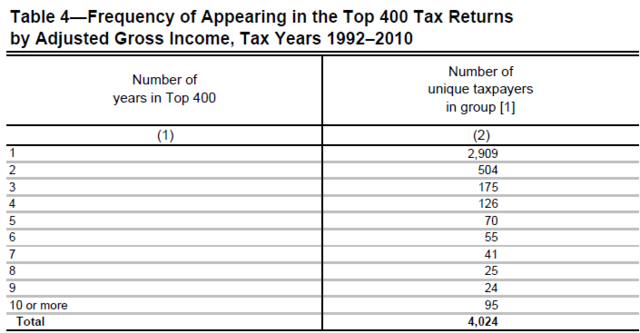 From Johnston's article: "Buffett’s income, you see, is a tiny fraction of his wealth because his main holding, Berkshire-Hathaway, does not pay dividends and he has never sold a share."

Post-1986 more and more small business income is showing up on personal returns rather than on corporate returns. What are researchers doing about this? Very little. More typical is a cursory denial that the effect is significant.

All studies of income inequality have major flaws, but researchers and journalists are happy to publish these articles as long as the (factually unsupportable) inference matches their preconceptions, right or left. It's like the old joke about the drunk looking for his keys down the block from where he dropped them because the light's better.

Only uniformed readers are deceived by articles on income inequality. Sadly, they are the majority of readers and deceiving them is the objective of these "studies".

What do you have against readers in uniform?

David, I wasn't aware of any readily available data source for inflation-adjusted capital gains. (I refer to capital gains in excess of inflation-driven increases in asset prices.)

In an extreme case of price increase matching 100% inflation over the holding period, the taxpayer will be taxed on half the asset value when no real increase has occurred. Income inequality statistics will treat that taxpayer as rich when he has no real income at all. This is one type of deficiency in the data being used to draw possibly invalid inferences.

I would love to see a study that attempts to track the distribution of Haig-Simons income over the last 60 to 100 years. My guess is that researchers attempting this find it difficult and then they discover that the results are ambiguous (and therefore not in agreement with the researchers' ideological preferences), so they drop the idea without publishing anything.

Because we now have full basis reporting we can adopt an inflation-adjusted system to tax gains. The figures in my columns are reported gains in constant dollars.

David, please clarify. Are you saying that the gains are reported relative to a nominal dollar cost basis (as today's tax law requires) and that the gain amount (not the cost basis alone or selling price alone) is then adjusted for inflation forward from some base year?

Because I want to see something different that that. I want to see what the data looks like when the cost basis is adjusted for inflation before the amount of the gain is calculated. Then you would have the true gain in current year dollars. You could adjust that dollar amount back to a base year if you want, but that effect would be minor compared to adjusting the basis.

As you noted, if cost basis and date of purchase are available in the data set, then it should be possible to do the calculation I want to see. I hope that's what you did.