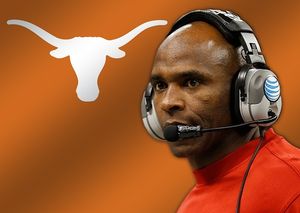 It long has been a practice for universities that want to hire a new coach to pay the "buyout" to get him out of his contract at his old school.

The question has been, who pays the taxes?

To at least a few schools, the answer is nobody. The universities of Texas, Louisville and Alabama at Birmingham have found a way to structure deals to avoid tax implications – simply pay the coach's current school for the rights to his contract, and renegotiate it.

Using that approach, the schools say, the coach does not owe a buyout for terminating his contract because he technically doesn't terminate the contract. It transfers to his new school, which reaches a new deal with the coach, just as schools routinely renegotiate such contracts.

Thus, while Louisville received $4.375 million when coach Charlie Strong left for Texas, the money did not come from Strong. Instead, with Strong's blessing, Louisville sold his contract to Texas. Texas assumed all of that deal's rights and obligations, and agreed to pay Louisville $4.375 million, the same amount as Strong's buyout. ...

It's an approach intended to avoid taxes for coaches and the schools. Under federal tax law, it is undisputed that a payment made by an employer to meet an employee's personal obligation must be treated as taxable income to the employee. But to the schools, a buyout payment is viewed as a business expense. ...

How the IRS or a tax court would view these deals is is an open question, said Jeffrey H. Kahn, a professor at Florida State's law school. Kahn and his father, Douglas A. Kahn, a professor at the University of Michigan law school, wrote a 2007 law review article about buyouts [Tax Consequences When a New Employer Bears the Cost of the Employee's Terminating a Prior Employment Relationship, 8 Fla. Tax Rev. 539 (2007)].

They agree that buyouts should not be taxable income for the coach, but they differ on how schools should structure the transaction, arguing that a buyout payment is more correctly viewed as a business expense of the school.