Ranking of School Does Not Affect Quality of Teaching

[T]his year’s National Survey of Student Engagement [Nessie], which was released on Thursday, ... took a stab at identifying educational quality on the institutional level, an attribute that is as important to higher education as it is hard to define. The survey collected data from 355,000 freshmen and seniors at 622 institutions in the spring.

Nessie researchers, who are based at Indiana University at Bloomington, created two indicators for quality. One, student-faculty interaction, asked students how often they talked with faculty members about career plans, course topics, or other ideas outside class, among other questions. The other measure, effective teaching practices, distilled student perceptions of how often their instructors clearly explained course goals and requirements, taught in an organized way, used examples to illustrate difficult points, or provided feedback.

The results were surprising, especially when they were grouped based on how selective a college is. ... [R]esearchers analyzed the measures of interaction and teaching according to selectivity, as defined by Barron’s Profiles of American Colleges.

The average student, the researchers found, experienced widely different degrees of educational quality in different colleges within the same category of prestige. And, in all but a few cases, the categories of selectivity had no meaningful relationship to the indicators of teaching and interaction. ...

"Conventional wisdom says that the more selective an institution is, the better it is going to be," Alexander C. McCormick, director of Nessie, said in an interview. "That’s not systematically true with these two measures." ... 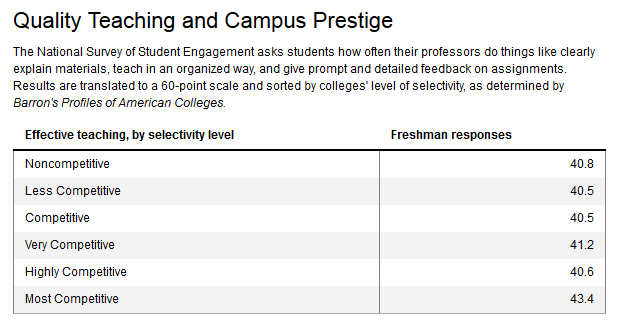 The results this year, though, do help achieve one of the goals behind Nessie’s founding in 2000—to shift the conversation about college quality away from assumptions about status, reputation, and wealth. By focusing on the sorts of activities that research suggests lead to robust learning, said Mr. McCormick, Nessie reflects something closer to what educational quality really is.

Nessie’s findings support a contention often made by faculty members at less-prestigious institutions, that a college off the beaten path can still provide an excellent education.

The emphasis on the interaction between students and faculty members also aligns with recent studies and scholarship, including a Gallup-Purdue Index survey released this year. It found that graduates were three times as likely to report thriving in their sense of well-being if they had connected with a professor during college. ...

Even one of the most vocal critics of Nessie agrees that the two measures it identifies as indicating quality do have value. But there is a much larger problem, said Stephen R. Porter, a professor in the department of leadership, policy, and adult and higher education at North Carolina State University. Nessie isn’t really measuring what it purports to, he said.

Students don’t have a common frame of reference to answer, for instance, how often they’ve learned something that changed their understanding of an issue over the past year, and few of them agree about what terms like "very much" or "quite a bit" mean. And then, he added, there are the questions themselves. Can students really judge whether their instructors are teaching in an organized way? The range in the results among different levels of prestige, he said, is probably not evidence of the variability of experiences at the institutions; it’s statistical noise.

Perhaps the students at less competitive students held their professors to a lower standard (or were simply poor judges of educational quality, which is reasonable given that they chose such poor schools).

The principal reason to attend more competitive schools, though, is that a degree from one of them is treated as an indicator of competence overall, not necessarily of the quality of education received, and is used by graduate schools and employers as a means of weeding out applications. By that measure, you're still much better off going to a more competitive school rather than a college "off the beaten path."