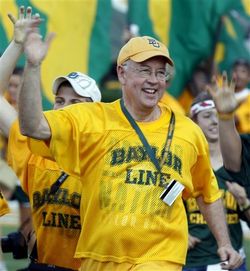 Many remember Mr. Starr from his days as independent counsel, when he delivered a report to Congress that chronicled President Bill Clinton’s dalliance with Monica Lewinsky, a White House intern. They would strain to recognize him in university life, where he is viewed as a goofy professor.

“We love him,” Gracie Millard, a freshman, said. “Around campus, people take selfies with him.”

Echoing several other undergraduates born in the mid-1990s, Ms. Millard added, “I didn’t know he was big in D.C.” ...

[C]ollege sports have given Mr. Starr’s public life a second act. He restored stability to Baylor, the country’s largest Baptist university, after becoming its fifth president in six years, including interims, and twice used his legal experience to help hold the Big 12 together amid the storms of realignment.

Baylor is representative of the college sports landscape, in which realignment, billion-dollar television contracts and lucrative postseasons have induced smaller, private universities to bolster their football programs. With its Christian mission, golden dome atop Pat Neff Hall and talented football team, Baylor appears to be an especially faithful rendition of the original mold, Notre Dame.

As a Baylor alumnus who has met Ken Starr, I can assure you he is quite popular and successful as Baylor University's president. The NY Times tried to write a piece on him that was fairly neutral. But the Times selected its two best reader comments that were blatantly politically biased against Starr. Certainly of the 200+ comments, someone who reads the Times had a positive opinion of the man worth reading.