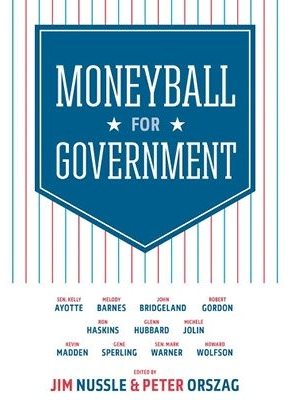 Data and evidence don’t lie—but for too long, our policy makers haven’t paid them nearly enough attention. In this refreshing collaboration, an all-star team of leaders and thinkers from across the political spectrum lays out an exciting and achievable vision for the country — one where policy makers base decisions not on politics or expedience, but on the hard evidence of what really works. For anyone who believes that government must do better for America’s children and their families, Moneyball for Government is a home run.

Based on our rough calculations, less than $1 out of every $100 of government spending is backed by even the most basic evidence that the money is being spent wisely. As former officials in the administrations of Barack Obama (Peter Orszag) and George W. Bush (John Bridgeland), we were flabbergasted by how blindly the federal government spends. In other types of American enterprise, spending decisions are usually quite sophisticated, and are rapidly becoming more so: baseball’s transformation into “moneyball” is one example. But the federal government—where spending decisions are largely based on good intentions, inertia, hunches, partisan politics, and personal relationships—has missed this wave. ...

Moneyball doesn’t happen overnight. Many of the “sabermetrics” practices that transformed baseball a decade ago can actually be traced back to the Brooklyn Dodgers general manager Branch Rickey, who is universally known for breaking the color barrier in baseball but mostly unacknowledged for being the first GM to hire a professional statistician. Rickey’s approach got little traction for nearly half a century, until the pivotal 2002 season, when the Oakland Athletics’ general manager, Billy Beane, built his club on analysts’ data rather than scouts’ beliefs.

What prompted Beane’s gutsy decision to revive the data-centered approach? With $40 million to spend on players in 2002, the A’s had to compete on a comically uneven playing field with big-market teams like the Yankees, which spent $125 million on its roster that same year. In other words, scarcity drove Beane’s break from established tradition. We hope and expect it will have the same effect on Washington in the years to come.

Flabbergasted? From the guy (Orszag) who claimed Obamacare would reduce the federal deficit (by counting Medicare savings twice). Now tell me another fairy tale. Here, pull my finger...

Scarcity in government? Maybe someday, but that day ain't today.

"Federal spending is actually very purposeful and targeted. It's just that the purpose is to benefit politicians"

End your thought there. Any benefit to a politician's constituency is intended as payment for continued support at the ballot box; any other benefit is purely coincidental and likely being researched by said politician's staff to avoid in the future.

This is an argument for more central planning than we already have. It would be a massive error to buy into it. The CBO and OMB are already there. They can buy some more computers and advise. Giving actual power to more "civil" "servants" who will game the system for their friends will simply corrupt our system of government further.

Ridiculous. When government can't even get rid of Head Start despite numerous studies showing its ineffectiveness, it means that they are at Little League level, not the pro level required to do "Moneyball". More basic changes are necessary.

How about having fantasy government

It's good to have the information available, but government is too important to make decisions by computer analysis.

Federal spending is actually very purposeful and targeted. It's just that the purpose is to benefit politicians and their constituents. Ignore the country.

Also, I feel like these dudes are ignoring the "politics" part of politics.

"Data don't lie." Actually, they always lie, because they are so frequently selective, and tend to igore factors that cannot easily be quantified. Surely the authors know that; they simply have an institutional interest in denying it. Minus one (so to speak).