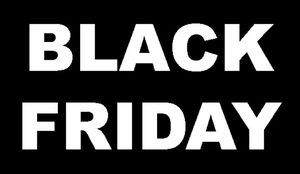 During Wednesday evening's edition of The Daily Show on the Comedy Central cable network, comedian Lewis Black devoted his “Back in Black” segment to slamming the tradition of Black Friday, the day after Thanksgiving and a time when stores open early and shoppers arrive before the sun comes up to buy items at huge discounts.

Black claimed that even worse than the rush to get tremendous bargains is the practice of “taxing” stores in malls that stay closed so their employees can spend the time with their families. “That’s the most anti-American thing I’ve ever heard!” Black exclaimed. “It’s like Sharia law for capitalism!”

“Next week is my favorite day of the year,” Black stated, but he wasn't talking about Thanksgiving. Instead, it's Black Friday because if you “trample a guy on a Tuesday afternoon, you get charged with assault. But do it in a Walmart on Black Friday, you get a PS4. But this year,” he noted, “something about Black Friday is twisting everyone's panties.” ...

The most disturbing clip came from Steve Doocy on the Fox & Friends morning program, who quoted an email from a viewer as stating: “You have got to be kidding me. … Just go to work. You can celebrate by eating a turkey sandwich while on break. [I] did it for years and was well compensated.”

“Sure, Thanksgiving is just as good eating a cold sandwich alone in the back of a Kmart,” Black snarled. “You don't even need cranberry sauce. You can season it with your tears.”

“But this year, it's not just employees getting screwed into working on Thanksgiving,” he stated. “it's the stores, too.”

In another clip, a female reporter stated that stores in a certain mall “have a tough choice this year: Open on Thanksgiving or possibly pay a lot of money in fines and penalties.” “You're taxing stores for observing Thanksgiving?” Black shouted. “That’s the most anti-American thing I’ve ever heard! It’s like Sharia law for capitalism!”

Rile them up by using the word tax when it has absolutely nothing to do with tax. Sure, it's an important issue, but there are enough messy issues with tax policy without adding this non-tax dispute to the mix.