Kudos to our Law Professor Blogs Network bloggers named to the 2014 ABA Blawg 100 -- "the 100 best Web sites by lawyers, for lawyers, as chosen by the editors of the ABA Journal": 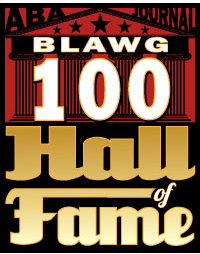 In 2012, we established the Blawg 100 Hall of Fame for those blogs which had consistently been outstanding throughout multiple Blawg 100 lists. The inaugural list contained 10 inductees; this year, we added 10 more, bringing the total to 30.