In this article, Graetz and Warren explain why integration should be on today’s tax reform agenda and discuss how that change could be structured.

In conjunction with this article, Tax Analysts is republishing as an eBook, now available on Amazon, the 1998 volume of Integration of the U.S. Corporate and Individual Income Taxes: The Treasury Department and American Law Institute Reports: 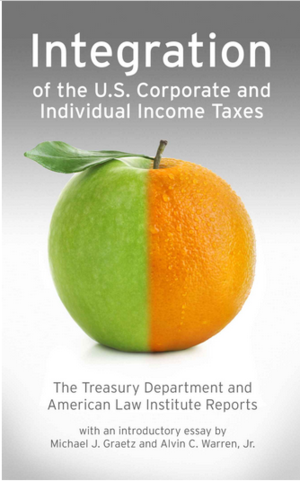 Business tax reform now seems stymied despite important proposals from prominent political leaders in both parties, including the president and the chairs of the House and Senate tax writing committees. Each represents a serious effort to reform business taxation. But those proposals have failed to advance in either the House or Senate.

Integration of corporate and shareholder taxes offers a straightforward approach that could help resolve many of the most difficult issues and provide the key to unlocking business tax reform. The general idea is to convert at least part of the corporate tax into a withholding tax that would be credited against individual shareholder taxes due on dividends.

The United States has long had what is called a classical income tax system, under which income is taxed to corporations and shareholders as distinct taxpayers. As a result, taxable income earned by a corporation and then distributed as a dividend may be taxed twice, once to the corporation and once to the shareholder on receipt of a dividend. In contrast, earnings on corporate debt are not taxed at the corporate level because, unlike dividends, interest is deductible. And businesses taxed as partnerships can benefit from lower total taxes than those taxed as corporations. This incoherent combination of results creates undesirable distortions in corporate and investor behavior.

This book contains the two leading studies of how to redesign the U.S. tax system to eliminate those problems -- one by the Treasury Department and the other by the American Law Institute. Both discuss transforming all or part of the corporate tax into a withholding tax for shareholders. This approach is particularly apt today, given the international competition now faced by many American companies.

The book also includes a brief explanation of why this issue is timely now, along with a specific proposal for reform. It also contains an earlier discussion of the main issues that would arise in designing a withholding-type system. Both essays were written by Michael J. Graetz, who at the time of the Treasury study was Treasury deputy assistant secretary for tax policy, and Alvin C. Warren Jr., who wrote the ALI report.