Mr. Anthony’s experience is an example of an aftershock still reverberating across higher education in the wake of the recession: Qualified residents are getting crowded out of their state universities by students paying higher tuition from out-of-state and foreign countries.

“If I had been born five years earlier, I would have gotten in,” said Mr. Anthony.

State funding for public universities fell by 23% in real dollars between 2008 and 2013, according to the State Higher Education Executive Officers Association.

To backfill the billions that evaporated from their budgets, public schools around the nation raised tuition and fees. When public outcry forced them to moderate those increases, scores of universities turned to out-of-state students who pay two to three times as much in tuition as their in-state counterparts.

But that out-of-state windfall is coming at a cost that is now being paid by people like Mr. Anthony: fewer seats for in-state students, even the most highly qualified. 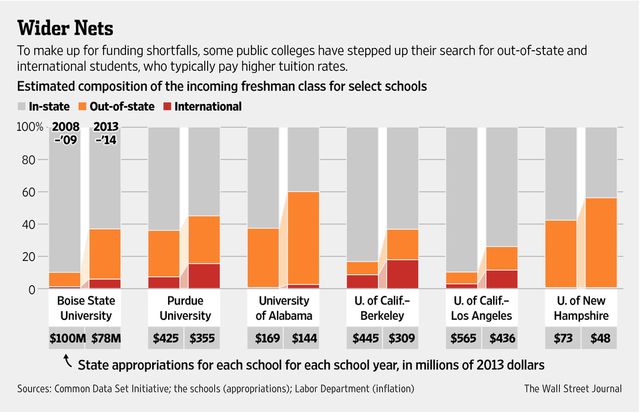 From the state's perspective, it's a foolish move. Students who grew up in a state and go to school there are more likely to live there and contribute to the economy when they graduate.

Finally, tuition isn't the only factor. Going for those quick bucks from out-of-state students doesn't take into account all the money a state has invested in a university over the past century or more nor that of state residents who have donated to the school.

Looking from the perspective of the state as a whole, this move is a penny-wise and pound foolish. What they save now, they're lose later with compound interest.a

A friend of mine's son, a lifelong California resident, was denied at Berkeley, UCLA and UCSD, but obtained a near full ride (on merit) to Cornell this fall...I'm just saying, as a California resident, why are my tax dollars supporting U.C. if our best and brightest are being turned away?

Exactly the plan of The University of Alabama -- recruit a lot of rich out-of-state students by spending the dollars to make the university, the campus facilities, and the college experience first class. And, that plan required big contributions as a result of a successful athletic program. You can bet professors at Alabama don't complain about coaches' salaries when they help produce those off-field results. The plan is working!

The plan is indeed working . . . talk about "social justice" and implement a wildly regressive policy. The right word is "disgusting."

PS Your rich out of State students lost to Mississippi last week.

Anon - (a) Cornell offers no merit aid. (b) There are other UCs besides Berkeley, UCLA and UCSD. Davis, Irvine, and Santa Barbara are all fine schools.

PPS I don't want to belabor this, but I think it's an important point.

The State of Alabama ranks 46th out of 50 in per capita income, with most of the other SEC (Southeastern Conference) states near the bottom, as well. The University of Alabama itself ranks 88th in the country (the law school has done somewhat better). So the strategy of "first class" football and other amenities has accomplished precisely nothing other than enriching coaches and administrators and, perhaps, giving the state's residents some kind of emotional bragging rights. Indeed, it isn't really a strategy at all, but a sort of fallback position: we can't be the best at anything that really matters so we'll have a good football team. That this example would be copied in other parts of the country is indeed very sad.

"Statistics are pliable," but here's a fact: Alabama graduates can get jobs.

It is crazy to think that Ivy League schools are now backups to Berkeley and LA. Perhaps I can trade my Berkeley degree from 2003 for an Ivy League one. My tab was less for four years than today's kids bill is for just one.

IU has done this for years.

Many state schools are aggressively recruiting foreign students for the same reason and many of them have no mastery of English and insulate themselves in ethnic/religious social enclaves.

Nathan A.: Cornell does offer merit aid through its Cornell Commitment program. Also some of the schools within the University are part of the SUNY state-school system. http://www.commitment.cornell.edu

My, does this mean the left has a bit of the capitalist free-market green virus in their souls?

Clarification - Cornell Commitment is a quasi a university scholarship fund. Acceptance into the programs is merit based. The amount of money you get is need-based. I doubt this has changed since I graduated.

Bureaucracies can't cut their own budgets. Too many fingers in the pie.

"There is no right to gain admission to a UC, even for staate residents"

Wrong. It is the stated mission of UC and CSU to accomodate the top X% and Y% of California high school grads. However, 20,000 eligible Americans are being waitlisted every year by UC and CSU while 6000 'DREAMers' get admission and financial breaks under the California DREAM Act.

John,
I like your assumption that a so-called "Dreamer" somehow can be mutually exclusive from being a top X% and Y%.

There's a simple explanation--price controls don't work in a market economy, and public goods don't work without a public that is willing to pay taxes to support them.

State legislatures want to have it both ways--they keep cutting funding for higher education, but they also cap tuition at public universities, starving them for resources.

The prices charged for education at public universities are way below market rates charged by private non-profits, and what little funding per student taxpayers provide doesn't begin to make up the difference.

That means public universities have to either degrade the quality of the education they provide, suffer a shortage by denying admission to qualified students, or get around the price cap by bringing in out of state students who will pay market rates.