LSAC reports that LSAT takers declined 8.1% in September, on the heels of a 9% decline in June: 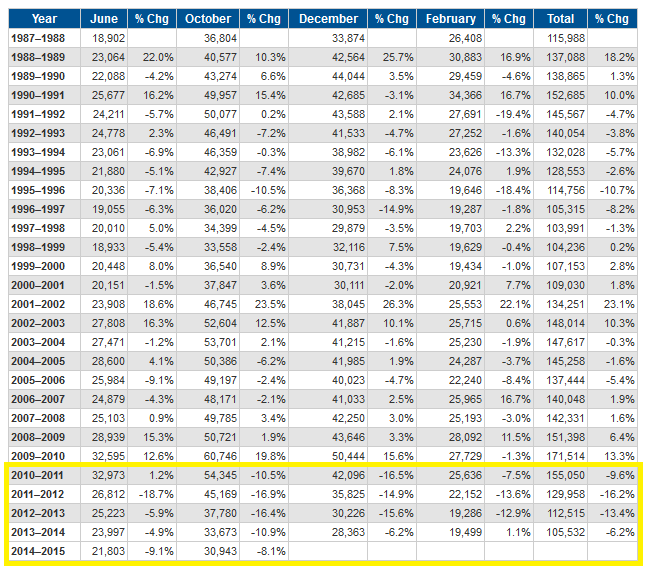 As Derek Muller (Pepperdine) notes, the worst may be yet to come: 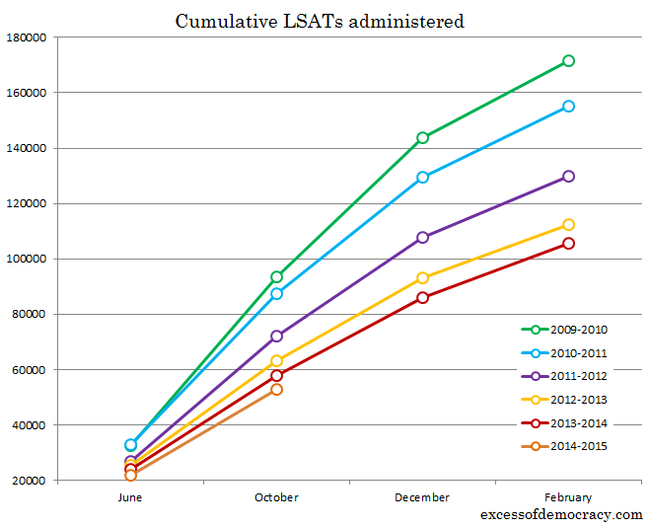 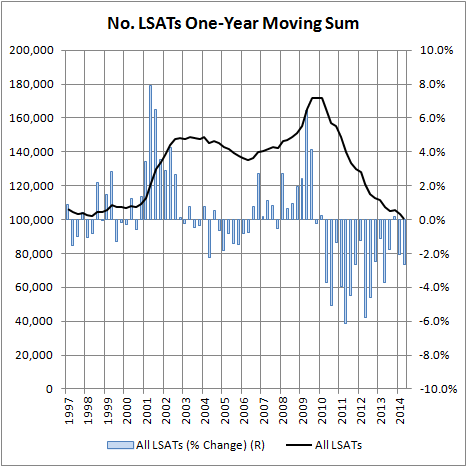 I think the average school's administrators will think that entirely closing their university's law school would be an unacceptable blow to prestige. A drastic cut in class and faculty size is reasonable to expect though - the path of least resistance is to buyout / lay off a chunk of your faculty while cutting 1L sizes.

Another thing of interest: how long will universities support and subsidize their law schools? Many deans have garnered $upport from university administration by arguing that this dip is temporary, and can be waited out. How long will top brass continue to buy that, year after year, as law schools become more of a money pit? I bet UC Irvine administrators, particularly the incoming Chancellor, have some serious buyer's remorse about the ill advised decision to open a new law school full of expensive professors, when everyone knew that there was absolutely no good reason for a new law school in California at the time...

5 year decline after a decade of bubble - no problem.

There are way more ABA approved law schools now than there were even just 20 years ago, 204 v. about 190 or so in total in 1994, roughly, I believe? More crocodiles competing for ever declining prey in the pond. So to say things are simply going back to "normal" levels fails to account for the increased number of schools now, versus then. The carnage I see is the high number of schools scrambling to compete with each other to survive on applicant levels from a time when there were less schools...

First, review that top chart more closely. The data, which begins in 1987-88, clearly shows that the average number of test takers was about 140,000/year in the late 80’s and early 90’s. The period of lower total numbers between about 1995-2001 represents the historical anomaly, and was probably driven by general economic prosperity which is a condition that is certainly not present today.

Second, the Muller article explains that the post 2004 aggregate numbers are significantly inflated because schools now consider only the highest score rather than averaging, which has resulted in a large increase in 2nd time test takers. This increases the total number of tests administered by 15-20%, which means the recent decline is far more dramatic than it even appears and certainly represents the lowest numbers in recorded history.

Third, the gross number and percentage of students enrolled in 4 year colleges has increased dramatically over the years, so that cannot be the explanation. See http://www.pewsocialtrends.org/2009/10/29/college-enrollment-hits-all-time-high-fueled-by-community-college-surge/

Another way to look at the last couple of years is as a return to normal after the irrational exuberance of 2001-2012. One might think about comparing these LSAT numbers to the number of college graduates in the U.S. in the previous year.

I would greatly appreciate it if one or more of the many law professors who read this blog would take the following challenge: Explain why the decline has continued at the same rate this year (actually, accelerated slighted) as last year.

For bonus points, hypothesize what factors might lead to a stabilization (or increase) in application numbers year over year.

Carnage? Why don't we call this the normal and predictable reaction of the market? An over-reaction to be sure, but then, that is what markets tend to do--contrary to the myth of efficient markets.