2014 on Pace for Record Number of Americans to Renounce Their U.S. Citizenship; 73% of Americans Living Abroad May Do So in the Future

Today the Treasury Department published the names of individuals who renounced their U.S. citizenship or terminated their long-term U.S. residency (“expatriated”) during the third quarter of 2014. 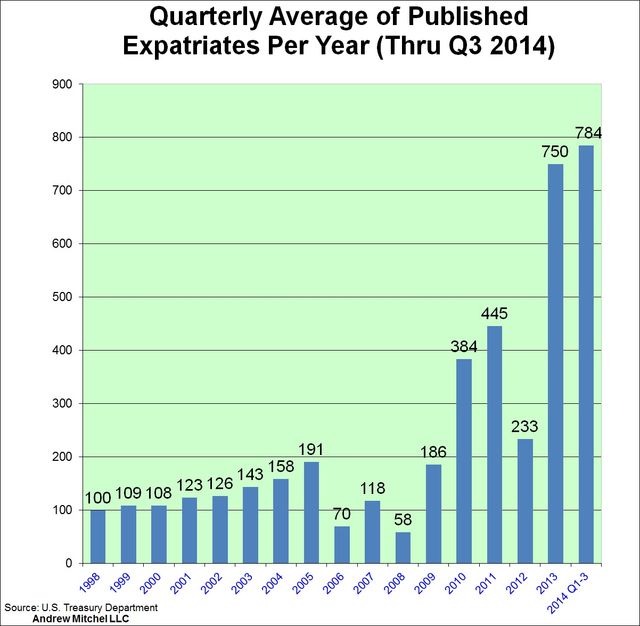 Value Walk, 73% Of Americans Abroad Consider Giving up Passport Due To FATCA:

73 per cent of Americans who live outside the U.S. are tempted to give up their U.S. passports in response to the introduction of FATCA (Foreign Account Tax Compliance Act), reveals a new survey by one of the world’s largest independent financial advisory organizations.The findings come as Federal Register data shows that the number of Americans renouncing U.S. citizenship increased by 39 per cent in the three months to September after the new global tax law came into force.

In the global poll, deVere Group recently asked more than 400 of its American expatriate clients: ‘Would you consider voluntarily relinquishing your U.S. citizenship due to the impact of FATCA?’

Cumulatively, 73 per cent of respondents answered that they had ‘actively considered it’, ‘are thinking about it,’ or ‘have explored the options of it.’

Having practiced US tax law overseas, with increasingly a focus on FATCA, I think most of those renouncing their citizenship fall into two categories -- accidental Americans (that is people born in the US but raised elsewhere) and long term expats. In the first case, these people have probably never gotten a US passport and do not even realize they are Americans. In the second, they have effectively cut their ties to the US, married a non-American, and made their life in a new place.
In both cases I found that they were not aware they had to continue to file US tax returns and possibly pay US taxes, though in most cases, US taxes get zeroed out by foreign tax credits as well as the foreign earned income exclusion. Only if they are engaged in some aggressive tax planning for their local country or have property or investments in the US were they hit with US tax.
This has always been the law but FATCA has brought the issue into focus.
As for the effect of this, I have a friend who was practicing in Zurich – at one point the waiting list to renounce was so long he was sending clients to the consulate in Budapest.

I think the numbers are staggering when you realize just how difficult it really is to renounce citizenship...

The renunciations certainly increased when people saw what Obama was about.

I have colleagues mention expatriation only in context of a solution for haters of the current administration and the Vast Left Wing Conspiracy, etc. I'm truly confused though - where do those people go? Want more progressive politics and and better social welfare benefits? Plenty of choices. Want a more "Patriot" lifestyle - the Caymans? What is that choice? Never mind, it's a Monday morning.

Jason makes a valid point, but the real denominator is not the total US population (300+ million) but rather the US population voluntarily living overseas (i.e., those not in the military, foreign service, or otherwise temporarily stationed abroad for work or study purposes). If 700 is the numerator, then what percentage of that overseas population is renouncing each year?

I don't know, all I see in the table is a large-percentage increase in a tiny number, leaving us with a somewhat less tiny number. As a proportion of the U.S. population, 700 is essentially the same as 100. "Seven times more people renounced their citizenship this year compared to 10 years ago" makes it sound like the USA is on the verge of collapse--until you take a second to realize that the US population is, what, over 300 million? So, something less than approximately 0.00023 percent of the U.S. population renounced its citizenship last year. This is not to say that US laws like FACTA may not be causing unfortunate and perhaps even unjustified hard to some U.S. citizens. But I am not so sure that 700 renunciations per year is as powerful a sign of the problems as this post suggests.

Many people find that it just costs too much to be a US citizen because of the burden of the tax system, not necessarily in terms of money, but in time and the amount of detail that must be fully reported.

A personal example: Just last week, I was informed that my account at a European financial institution must be promptly closed only because I was a "US Person" and the company did not want the costs and risks associated with complying with the new US law commonly called "FACTA".

This would not be so bad, except this is the THIRD time my account as been ejected by three different companies. Twice in the UK and once in Europe.

Here is the source I cite regarding US State Dept. assistance or evacuation:
http://travel.state.gov/content/passports/english/emergencies/crisis-support.html
"...evacuation costs are ultimately your responsibility; you will be asked to sign a form promising to repay the U.S. government. We charge you the equivalent of a full coach commercial fare on a comparable mode of transportation at the time that commercial travel ceases to be a viable option. You will be taken to a nearby safe location, where you will need to make your own onward travel arrangements. Typically, you will not have an opportunity to select the destination to which we will take you; it will be to the nearest safe location (only in rare circumstances will that be to the United States). If you are destitute, and private resources are not available to cover the cost of onward travel, you may be eligible for emergency financial assistance.".......

GSo, that is a convenient myth - and an ill considered kneejerk response without merit. Anyone airlifted is billed in full for the costs anyway. Since the majority of US citizens living outside the US are in Canada, Mexico and the UK, how frequently do you think that the US is called on to rescue expats in Ottawa or London England, etc. ? Even the consular official who posed that as a 'benefit' of remaining a US person had to admit that.

Unless something changes we will continue to be without the appetite or capacity to undertake any rescue missions anyway.

The upside is that the US do not have to spend money on air lifting them out in times of trouble.