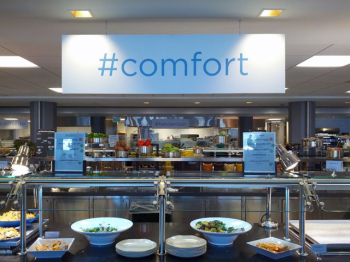 There is a grumpy new face in line at Silicon Valley's lavish freebie cafeterias: the Internal Revenue Service.

Staffers at technology companies such as Google, Facebook and Twitter long have enjoyed free gourmet meals, courtesy of their employers. The groaning buffets, in-house pizza joints, and kitchens stocked with organic produce are an intrinsic part of the culture in much of Silicon Valley, encouraging both collaboration and longer work hours.

The IRS, arguing that these freebies are a taxable fringe benefit, has given new attention to the issue in recent months during routine audits of some companies, tax lawyers said. When employers haven't been withholding taxes related to the meals, the IRS increasingly has sought back taxes that can amount to 30% of the meals' fair-market value, the lawyers said. ...

In another sign of a new focus on the issue, the IRS and U.S. Treasury Department last week included taxation of "employer-provided meals" in their annual list of top tax priorities for the fiscal year ending next June. The agencies said they intend to issue new "guidance" on the matter, but gave no specifics about timing or what the guidance would say.

Tax lawyers expect some employers will fight the IRS over the matter, and said the issue is likely to be decided in the courts. Any broad IRS crackdown could spur complaints about petty government interference with the culture of a crucial industry. But allowing free meals to go untaxed, critics say, distorts the economy and gives some employers an unfair edge. ...

IRS interest in the free-meals issue ticked up last year, after The Wall Street Journal published an article focusing on whether the food should be considered a taxable benefit. ...

In general, tax experts said, employer-provided meals—beyond those served at the occasional business meeting—are a taxable fringe benefit. ... But it is a complex area of tax law, and there are exceptions. For example, meals can remain untaxed if they are served for a "noncompensatory" reason for the "convenience of the employer."

Some lawyers argue that, in many cases, corporate free-meal programs fit under the "convenience of the employer" test. "Look at the time savings," said Mary B. Hevener, an employee-benefits attorney at Morgan, Lewis & Bockius LLP in Washington. "If your employees are able to eat lunch and get back to their desks in 20 or 30 minutes, that's a big time savings," she added. "The food is a lot healthier in many cases. And maybe you don't want your employees running around in other eateries talking business."