Should Universities Profit From Vodka Jell-O Shots Consumed by Their Students? 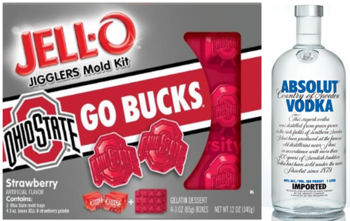 Last month -- just in time for a new season of college football -- Kraft Foods released a new line of Jell-O molds in the shapes of various university logos. Four of the "jiggler mold kits" were unveiled last year, but products for 16 more teams have now been added, including the University of Alabama, Ohio State University, and the University of California at Los Angeles.

In a press release, Kraft said the kits are meant to be used in creating Jell-O treats for tailgate parties for alumni and fans. But some are concerned that the themed molds could be seen as university-endorsed invitations to create alcohol-laced "Jell-O shots" -- a mixed message for universities fighting to curb binge drinking among students. ... Aaron White, the program director of college and underage drinking prevention research at the National Institute on Alcohol Abuse and Alcoholism: "If I were a student, I'd be awfully confused if I heard about the dangers of drinking and drinking games at freshman orientation and then when I got to Wal-Mart, I found these Jell-O molds with my school's logo on it."

Kraft admits that it is aware Jell-O shots are a popular way to consume the dessert, but the company told the website Vocativ that it doesn't condone using the molds for that purpose. The half-dozen universities contacted for this article did not return requests for comment.

The financial details behind the universities' licensing deals with Kraft have not been released, but colleges have a profitable history of licensing their trademarks to products that may sometimes send a mixed message to students. Shot glasses and pint glasses sporting college logos have been a mainstay at university bookstores for decades. Some colleges have even licensed their logos to appear on Ping-Pong balls and so-called "tailgate tables." Many college students have other names for the products, often used for the campus favorite beer pong.

Jell-O shots can be a particularly risky form of binge drinking, White said. Because Jell-O masks the flavor of the alcohol, it can be difficult for students to recognize how many drinks they've actually consumed. Like the similarly fruit-flavored and highly alcoholic college staple "Jungle Juice," when students consume Jell-O shots "the line between a small buzz and a dangerous overdose is very thin," White said. Students may also think of Jell-O as food, he added, meaning the consumption could be happening on a dangerously empty stomach.

Jell-O Shot kits are available for these twenty universities:

Yes! Without a doubt, college students would not do Jell-O shots were it not that the molds are in the shape of their school. What sheer nonsense!