[A]n estimated two million Americans age 60 and older ... are in debt from unpaid student loans, according to data from the Federal Reserve Bank of New York. Its August Household Debt and Credit Report said the number of aging Americans with outstanding student loans had almost tripled from about 700,000 in 2005, whether from long-ago loans for their own educations or more recent borrowing to pay for college degrees for family members.

The debt among older people is up substantially, to $43 billion from $8 billion in 2005, according to the report, which is based on data from Equifax, the credit reporting agency. As of July 31, money was being deducted from Social Security payments to almost 140,000 individuals to pay down their outstanding student loans, according to Treasury Department data. That is up from just under 38,000 people in 2004. Over the decade, the amounts withheld more than tripled, to nearly $101 million for the first seven months of this year from over $32 million in 2004.

While older debtors account for a small fraction of student loan borrowers, who have accumulated nearly $1 trillion in such debt, the effect of owing a constantly ballooning amount of debt but having a fixed income can be onerous, said Senator Bill Nelson, Democrat of Florida, chairman of the Senate Special Committee on Aging.

“Those in default on their loans can see their Social Security checks garnished, leaving them with retirement income that leaves them well below the poverty line,” he said at a committee hearing this week to examine the issue. “Some may think of student loan debt as a young person’s problem,” he said, “but, as it turns out, that is increasingly not the case.” ...

The Government Accountability Office warned this week about the growth of educational debt among seniors. It released a report that relied on different data from that used by the Federal Reserve Bank of New York, but nonetheless painted an ominous picture of lingering debt burden. 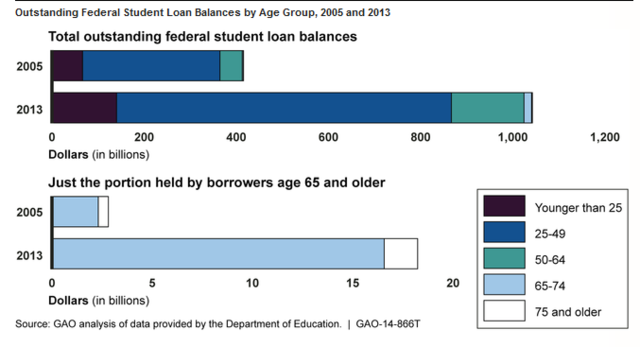 More than 80 percent of the outstanding balances are from seniors who financed their own education, the GAO report concluded, and only 18 percent were attributed to loans used to finance the studies of a spouse, child or grandchild. But the default rate for these loans is 31 percent — a rate that is double that of the default rate for loans taken out by borrowers between the ages of 25 and 49 years old, according to agency data.

Sad, sad, sad. I just move backed to the university town where I went to college in the early 1970s. A lot has changed and much of it isn't for the better.

* The cost of tuition and textbooks has gone up far higher than inflation.

* All the inexpensive and admittedly run-down housing is gone. Other than sleeping in the bushes, you can't live cheap.

* PE is no longer required, but there's a $20 million rec center that all students must pay for but that mostly benefits those who don't need to work while in school.

By working as a co-op student, summers, and part-time during school I managed to graduate broke but debt-free. Only students with rich parents can do that today. Most graduate with huge debts they'll be years repaying. Many will be in their mid-thirties before they can begin to buy a home.

What's the biggest reason? When I attended, loans weren't an option. Everyone--students, faculty and administration--had to keep costs down. Now those costs are projected out into the future and ignored.