Former AALS President: Thomas Jefferson Is 'The Canary in the Coal Mine of Legal Education,' Expects Six Law Schools to Close

Chronicle of Higher Education, As Law School Struggles to Stay Open, Some See ‘a Canary in the Coal Mine’:

Much has been written about the sky-high debts facing law-school graduates, who face difficult odds in landing jobs that will help pay off their loans. But students at Thomas Jefferson School of Law are among the first who are contemplating the possibility of a get-out-of-debt-free card that no one’s eager to cash in.

It would apply only if the law school, which is struggling to restructure a $133-million debt, were to close—a prospect the private, stand-alone school in downtown San Diego is determined to avert. After failing to make a June payment, the school was given a reprieve until October 17 but ordered to pay an additional $2-million.  ...

The number of applicants to law schools accredited by the American Bar Association plummeted 45 percent from 2004 to 2014, according to preliminary figures released by the association. By 2013, first-year enrollment had slid about 18 percent, a devastating decline for schools, like Thomas Jefferson, that depend heavily on tuition. 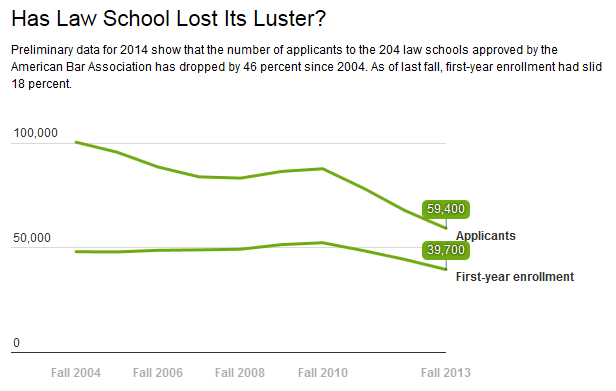 As Thomas Jefferson struggles to remain afloat, Michael A. Olivas, a former president of the Association of American Law Schools, suggested it may be "a canary in the coal mine of legal education." The nation has too many law schools, said Mr. Olivas, who is also a professor of law at the University of Houston, and he expects some will close in the next several years. "I believe there will be, in all likelihood, about a half-dozen schools that are on anybody’s watch list," he said.

Located in a state saturated with lawyers and with a bar exam that is notoriously tough, Thomas Jefferson’s statistics this year have been grim. The number of entering students dropped 43 percent, from 422 in 2010 to 242 this fall. Fewer than three in 10 the school’s 2013 graduates landed full-time, long-term jobs requiring a law degree nine months after graduation, and the average law-school debt for its graduates that year was more than $181,000, the highest of any law school nationwide, according to U.S. News & World Report. ...

Thomas Jefferson is hardly alone in its struggles. Other law schools suffering sharp enrollment declines in recent years include those at the University of La Verne and the Catholic University of America, as well as New York Law School. Thomas M. Cooley Law School, with five campuses in Michigan and Florida, defied gravity for years, opening a new campus in Florida two years ago even as other law schools were scaling back their enrollments. The school, which accepts more than 80 percent of its applicants, saw enrollment plummet 41 percent from 2010 to 2013, from 3,931 to 2,334, according to a report this year in National Jurist. This fall it stopped accepting first-term students on its Ann Arbor campus as part of a plan that includes faculty and staff layoffs across its four Michigan campuses. Now it’s considering shutting down the Ann Arbor campus.

A spokesman for Thomas Cooley, James D. Robb, said the school had made an "internal decision" not to divulge how many people had been laid off. But he insisted that now is "a great time" to apply to law schools.

Why not take a 'law school advantage' job, or perhaps the faculty could always go into private practice as a group.

Wait! I know! *Threaten* to go into private practice as a group. Law firms in the area will be so frightened of having to compete with the elites from TJSL that they'll pay protection money.

Wait? What? This is bad news?

This is a good way to differentiate TJLS from the pack! I expect TJLS to claim that they’re not on decline, but rather "on the forefront of the legal education model."

I just had a chat with an alumni. Small World.

In the short-term, this sucks for the students and the professors at these institutions. In the long-term, I think this is good for the legal profession.

Six schools? more like 60+. Thomas Jefferson is Lehman Bros.; law schools, however, are NOT too big to fail. Don't expect an orderly shakeup where only six schools close over the next few years. That's generally not how things work. Especially don't expect a Congressional (or state legislature) bailout.

Applications drop 45% and enrollment only drops 18%. Simply astonishing. It is clear as day that law schools do not care at all about the quality of individuals that they push into this profession.

New York Law School is now taking out advertisements on WFAN, joining such illustrious institutions as the Connecticut School of Broadcasting, and the Northeast School of Trucking (I am not joking). I think the only admission requirement is to correctly spell Mike Francesa.