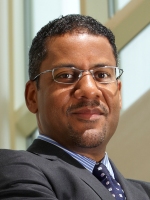 Cleveland-Marshall College of Law is pleased to announce the appointment of Dean Craig M. Boise to the Joseph C. Hostetler – Baker & Hostetler Chair in Law.  The Chair in Law was created through generous gifts from John D. Drinko, a former managing partner of the firm, and other donors, and is the first chaired professorship created at Cleveland-Marshall College of Law.

Hewitt B. Shaw, Managing Partner of BakerHostetler’s Cleveland office, said “BakerHostetler is honored to have our firm’s name closely identified with the innovative and progressive leadership demonstrated by Dean Boise.”

Dean Boise noted that BakerHostetler has been a strong supporter of Cleveland-Marshall over the years, having previously underwritten visiting professors, named professors, annual lectures, and student scholarships. “We are grateful for BakerHostetler’s many generous contributions to the law school, and I am honored to be connected to the long tradition of excellence and innovation at the firm through the Chair in Law.”

Dean Boise assumed the Cleveland-Marshall deanship in 2011, and has guided the law school through a difficult time in legal education.  During his tenure, the law school has created one of the country’s first incubators for graduates entering solo practice, achieved a record July bar passage rate of 93%, increased annual fund giving by 8%, and climbed twenty places to number 115 in the U.S. News and World Report national rankings of law schools.