I
n Germany, being an official church member usually means paying an extra tax. But a change in the country's tax code is now causing many believers to leave the fold.

Germany is just one of a number of European countries where members of the main organized religions pay a special levy on income to provide the bulk of churches' finances. But when a loophole concerning income from capital gains closes next year, church leaders have good reason to expect an exodus.

So far this year, the number of Germans leaving the country's Protestant and Catholic churches has reached its highest level in 20 years, twice last year's level—a surge many clergy and finance experts blame on the changes in how the tax is levied.

The outflow is now fueling a debate about whether a levy that goes back to the 19th century is an appropriate way to finance churches in an increasingly secularized Germany. 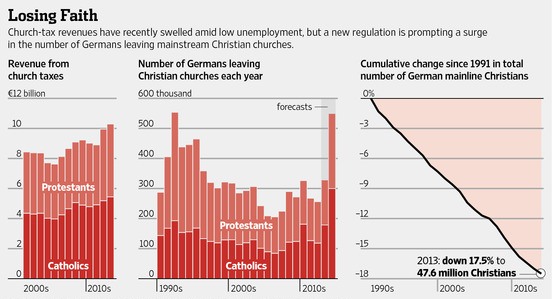 Despite emptier pews across Europe, the church tax is a hallmark of the close financial bond that remains between church and state on many parts the Continent. As in Austria, Sweden, Denmark and elsewhere in Europe, the German government collects a special tax from registered believers on behalf of its biggest organized religions, which use the revenues to finance churches and pay clergy salaries. The taxes also help support affiliated hospitals and social services.

While the church tax had officially always been due on capital gains, it had never been properly enforced. Under the new rules, which the churches lobbied for, banks will be required to report their customers' religious affiliations, rather than wait for customers to volunteer the information. "We're not doing it for the additional revenue," said Thomas Begrich, finance chief for the Protestant Churches of Germany, or EKD, defending the change. "The wealthy need to pay their fair share."

Quote: "We're not doing it for the additional revenue," said Thomas Begrich, finance chief for the Protestant Churches of Germany, or EKD, defending the change. "The wealthy need to pay their fair share."

He's certainly not going the get that revenue, fair share or not. Evading the tax is easy. The wealthy will simply leave one of the established denominations for either no church or one of the free churches.

The bad news is that this tax has been used to cover many social services. Much of that income is likely to disappear and some will suffer.

Of course, in the long run this is good. Charitable and religious giving should be voluntary not coerced. And too close a church/state tie hurts both.