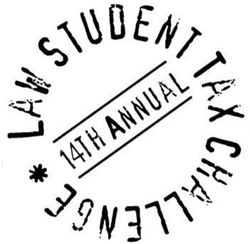 An alternative to traditional moot court competitions, the Law Student Tax Challenge asks two-person teams of students to solve a cutting-edge and complex business problem that might arise in everyday tax practice. Teams are initially evaluated on two criteria: a memorandum to a senior partner and a letter to a client explaining the result. Based on the written work product, six teams from the J.D. Division and four teams from the LL.M. Division receive a free trip (including airfare and accommodations for two nights) to the Section of Taxation 2015 Midyear Meeting, January 29-31 in Houston, TX, where each team will defend its submission before a panel of judges consisting of the country’s top tax practitioners and government officials, including tax court judges. The competition is a great way for law students to showcase their knowledge in a real-world setting and gain valuable exposure to the tax law community. On average, more than 60 teams compete in the J.D. Division and more than 40 teams compete in the LL .M. Division. For examples of the "Best Written" winners from past competitions, please click here.