Schizer Named to Ginsburg Visiting Chair in Taxation at Georgetown 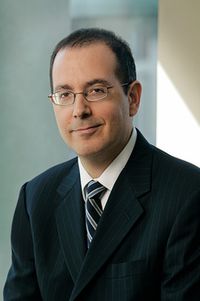 Georgetown University Law Center Dean William M. Treanor is pleased to announce the appointment of David Schizer to the Martin D. Ginsburg Chair in Taxation. Schizer will hold the chair as a visiting professor during the 2015 spring semester.

“David Schizer is an extraordinarily gifted scholar of tax law and policy and a wonderful teacher, and he left a great mark as dean at Columbia. We are delighted that he will be visiting at Georgetown, and he is the ideal choice to hold the Ginsburg Chair. Marty Ginsburg was an important mentor for David, who also clerked for Justice Ginsburg,” said Treanor. “We are deeply grateful to H. Ross Perot for his generosity in endowing this chair, a fitting tribute to Marty’s great contributions as a lawyer, a scholar and a teacher.”

Schizer, who will teach a Tax Law and Public Finance Workshop, is the Harvey R. Miller Professor of Law and Economics at Columbia Law School, where he served as dean from 2004 to 2014. When he was appointed, he became the youngest dean in the school’s history, and he was the school’s longest-serving dean in over four decades. Prior to his service as dean, he was the Wilbur H. Friedman Professor of Tax Law at Columbia, which awarded him the Willis L.M. Reese Prize for Excellence in Teaching in 2002.

Schizer is one of the nation’s leading academic experts in tax law, and his research focuses on energy law and corporate governance issues. He has written more than 30 books and articles on taxation, governance, and energy law, on such topics as financial instruments, executive compensation, gas taxes, the shale oil and gas and hydraulic fracturing, the charitable deduction, tax expenditures, the interplay of tax and corporate governance and press subsidies.

Schizer worked at Davis Polk & Wardwell prior to joining the Columbia Law School faculty in 1998. He is a graduate of Yale University, where he earned his B.A., M.A. and J.D. He clerked for Judge Alex Kozinski of the U.S. Court of Appeals for the 9th Circuit from 1993 to 1994 and for Justice Ruth Bader Ginsburg of the U.S. Supreme Court from 1994 to 1995.

Widely regarded as one of the nation’s foremost tax law experts, Martin D. Ginsburg joined the Georgetown Law faculty in 1980, after his wife, U.S. Supreme Court Justice Ruth Bader Ginsburg, became an appellate judge in Washington. He served on the Law Center faculty until his death in 2010.