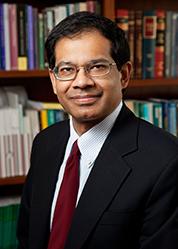 He serves on the Board of Directors of the American Law and Economics Association, and formerly served on the Board of Directors of the National Tax Association. Until recently, he was Editor-in-Chief of the peer-reviewed journal International Tax and Public Finance. He has previously held postdoctoral or visiting positions at Harvard, Michigan, Georgetown, and the Australian National University. His PhD thesis (in Economics at the University of California at Berkeley) was awarded the National Tax Association’s Outstanding Doctoral Dissertation Award. His scholarship, which spans the fields of taxation, the economic analysis of law, and corporate finance and governance, has been published in leading scholarly journals in law, economics and finance. It has also been cited in various media outlets, including the New York Times, the Washington Post, Bloomberg Businessweek, and The Economist.

Dhammika suffered serious injuries in a racially-motivated knife attack in Champaign-Urbana in 2011.

This is a tough loss for Illinois, but a big win for Chicago.