Thoughts on Law Prof Work-Life Imbalance From Those Left Behind

Patricia Sun, the widow of Law Prof Andy Taslitz (American) who died of cancer on February 9 at age 57, wrote a gripping Facebook post on Thoughts on Work-Life ImBalance From Those Left Behind (excerpted here with a photo of Andy and Patricia, with Patricia's permission): 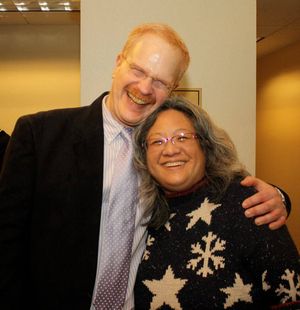 I'll post this on Andy's FB page because I'm not sure anyone reads mine anymore, and while this can apply to anyone, it's really addressed to law professors.

In the past 4 months I have kept seeing accolades to Andy's amazing productivity - the 100+ articles, the zillions of case books, etc., and I have always told people that yes, he led a normal life, yes, he got plenty of sleep and yes, he even took plenty of naps.

But that's not really true. His life was not normal, at least not to me, and it certainly wasn't balanced. Yes, I know he genuinely loved his work and yes, I know he had a brilliant and unusual mind, and yes, I know he was cut down in his prime when he still had so much more to give. But all of that came with a price. Not the teaching or the mentoring, but all that scholarship. ...

So what was the price in the end? In the entire time we were married we only took a two-week vacation once, and just about every vacation we did take was wrapped around one of his conferences or presentations. The furthest he went on each of his two sabbaticals was his front bedroom, because he spent every single day on his manuscripts. He turned down trips to China, to South Africa, to Japan, and most impressively to me, he twice turned down a chance to be an observer at Guantanamo. Of course he always had different reasons -- S. Africa wasn't safe, the timing of the China trip was bad, etc., but I knew the real reason was he didn't want to take time away from work. ...

So in the end how do I feel about his productivity? Yes, he enjoyed it, but he also killed himself trying not to disappoint people or to break deadlines.

And as I sit here with the dogs on July 4th, I think was it really that important to add one more book review to his CV or to do one more tenure letter as a favor for someone he never met? I'm glad his peers all loved him for the reliable genius that he was, and I don't know how he feels wherever he is now, but I am very, very bitter.

Yes, he was a great academic mentor and collaborator, but the price for all that frenzied output was me, and there's a part of me that will never forgive him for it, because he died right after he promised to slow down and enjoy life itself more.

So think about it, members of the "academy." All that talk about US News rankings and SSRN citations. Do you REALLY think stuff like that is life and death to your loved ones? I think most of them would sacrifice one more line on your resume for one more day of quality time with you. I know I would. But it's a bargain I can't make any more.

Food for thought, especially for someone who last spent an entire 24-hour period not working exactly nine years ago to the day.

Update:  ABA Journal, Was Law Prof’s ‘Frenzied Output’ Worth It? His Widow Says Work Devotion Came at a Price

Former Editor,
Sorry if I wasn't clear. All I was saying is that I am convinced that a professor could be considered "productive" or at the very least not get fired with 20-25 hours a week and four weeks vacation. Personally, I work about 55 hours a week during the school year and about 20 hours a week during the summer. I publish about 2 major law review articles a year and am considered a top performer at my school. However, I know I could take a number of steps back. Perhaps that is because my school is in the 100-150 range. Maybe professors at top schools have more pressure.

My only point is that BigLaw associates have no choice but to work long grueling hours. Law professors have a choice to work 25 hours a week or 65 hours a week. I know plenty at either end. Personally, I do not think it is OK to 25 hours a week, but I am comfortable with my level of effort. I think my school and my students get their money out of me and I enjoy what I do.

This is a really enlightening discussion for someone outside of the legal academy but with an interest in legal education. Thank you both for being so candid. I find myself thinking that there must be a middle ground between you. Biglaw with 1800 billable hours and sixty+ hour work weeks, or its academic equivalent, is not a healthy work-life balance, but neither does 20-25 hours a week and a 4 week vacation every year strike me as a responsible balance for a full time professor. The latter is just the sort of behavior that many law school critics latch on to as evidence of faculty being overpaid and detached from the profession.

AnotherProf, please don't take this the wrong way, but I find it more than slightly concerning that you don't seem to find anything wrong with the fact that "no one would fire you if you worked 20-25 hours a week and took 4 weeks vacation" as a law prof. (to the knowing detriment of both scholarship and students). Are you saying that doing so is an ok way to behave as a law prof., regardless of the employment consequences (or lack thereof)? You seem to imply that. If that's not what you mean, and I suspect its not, what would you suggest is an appropriate and responsible balance, given the flexibility available?

JustAnother, There is a big difference between doing enough to be considered productive and living up to one's own expectations. I think colleagues, and certainly deans, will consider you productive with 1-2 articles a year, maybe even just 1 a year. While articles can take significant time, they really do not have to with 1000+ legal journals looking to publish just about anything. Deans can count, but can't read... As to meeting with students, new preps, etc. You can also do about as much or as little of that as you choose. Again, all I am saying is that professors, especially those not at top-25 schools, are usually not forced to spend a lot of time at work. Many of us choose to do so because we want to write good articles, want to help our students, want to improve our teaching, etc. But no one would fire you if you worked 20-25 hours a week and took 4 weeks vacation. In contrast, try taking 4 weeks vacation at a big law firm or billing less than 1800 hours and see how long you last.

@AnotherProf: You state that, in legal academia, "you can be seen productive as an academic just by publishing an article or two a year". First, "just" publishing an article or two a year is a significant endeavor. Reading broadly enough to understand a field and think through a point that is both novel and significant, then researching it thoroughly enough that what I say is both correct and useful, then writing carefully and editing thoroughly enough that it is accessible to and conveys what I mean to its intended audience: for me, at least, that takes hundreds of hours of focused work. If that were all legal academics were expected to do, I might agree with "just": as a full-time job, that would not cut it. But add to it teaching 3-4 classes a year (often involving one or two new preps or course overhauls), staying current on the law in those fields as well as for past courses I have taught and might teach again, meeting with students outside of class and assisting and supervising their research in areas on the periphery of my knowledge, engaging in professional activities like giving CLE presentations for no additional pay, performing service activities for my law school and university, ... . As a former law firm partner, I don't see the life of an academic as less demanding than practicing law, just differently demanding. In some ways this world is easier for me; in others, not. Overall, it's the set of expectations and rewards I prefer. But to say that all an academic has to do is produce one or two articles a year to succeed at this field is deceptive at best, at least as I have experienced and seen the world of academia.

May you be comforted for your loss. The circumstances of it are a very powerful argument for traditional Sabbath observance, which carves out an island of non-negotiable rest in every week.

I'm very sorry for your loss and the great sadness it is causing you. You married a fine man and I'm sure you helped him be the special person and law professor he was.

Thank you for sharing your thoughts and helping other professors about finding balance. Life is not about writing papers but it's also about living a balance life that involves your love ones. Sorry for your loss and that your husband is not able to slow down to enjoy his retirement with you. Our culture is toxic with the value of being a work-a-holic. He must have been a very smart person but it took a toll on you.

Transactional Prof,
The difference between biglaw and academic life is that in biglaw you can actually lose your job for failing to buy into the "insanity of nonstop work." In contrast, you can be seen productive as an academic just by publishing an article or two a year. Professors who do not take at least 3-4 weeks of vacation each year do so by their own choice.

Especially since wages have been decoupled from productivity gains since the mid-1990's, and the divergence is only growing. Work harder for no additional monies, or be terminated because at-will employment. And jobs are few and far between. Is there any wonder why the young are so cynical these days?

The same can be said for a lot of professions. We'd all benefit if everyone slowed down just a bit. To dream.

I am 65, have published a bunch in 35 years as a tax prof, am on a two week vacation in South Dakota with my 2 and 4 year old grandchildren, and I plan never to write another law review article ever, for all the reasons she explains.

It's sad that the only time we hear talk of work-life balance for law professors is when one has passed. The rest of the time all we hear is bean-counting about which faculty are most productive--meaning nothing more than which faculty publish the most articles.