Median Household Net Worth Has Fallen 36% Since 2003

Economic inequality in the United States has been receiving a lot of attention. But it’s not merely an issue of the rich getting richer. The typical American household has been getting poorer, too.

The inflation-adjusted net worth for the typical household was $87,992 in 2003. Ten years later, it was only $56,335, or a 36 percent decline, according to a study financed by the Russell Sage Foundation. Those are the figures for a household at the median point in the wealth distribution — the level at which there are an equal number of households whose worth is higher and lower. But during the same period, the net worth of wealthy households increased substantially. 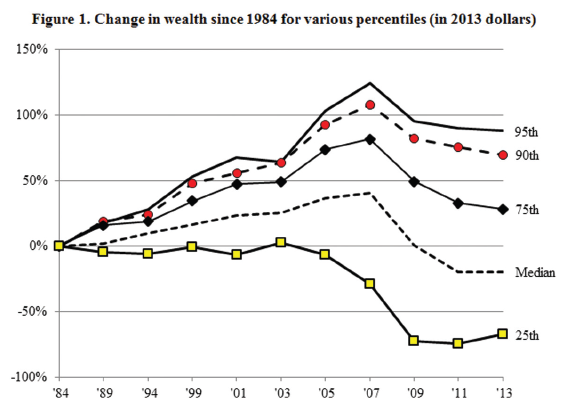 Without even reading the study (apologies), I can confidently surmise that the failure of residential housing values to fully recover since 2007-08, unlike equity securities markets, is the culprit here, perhaps compounded by the trend of less sophisticated investors removing themselves from the equity markets in 2008-09 and never returning.