Wealthy Clintons Use Residence Trusts to Limit Estate Tax They Back

Bloomberg:  Wealthy Clintons Use Trusts to Limit Estate Tax They Back, by Richard Rubin: 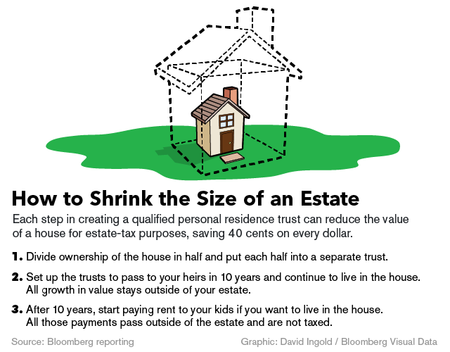 Bill and Hillary Clinton have long supported an estate tax to prevent the U.S. from being dominated by inherited wealth. That doesn’t mean they want to pay it.

To reduce the tax pinch, the Clintons are using financial planning strategies befitting the top 1 percent of U.S. households in wealth. These moves, common among multimillionaires, will help shield some of their estate from the tax that now tops out at 40 percent of assets upon death.

The Clintons created residence trusts in 2010 and shifted ownership of their New York house into them in 2011, according to federal financial disclosures and local property records.

Among the tax advantages of such trusts is that any appreciation in the house’s value can happen outside their taxable estate. The move could save the Clintons hundreds of thousands of dollars in estate taxes, said David Scott Sloan, a partner at Holland & Knight LLP in Boston. “The goal is really be thoughtful and try to build up the nontaxable estate, and that’s really what this is,” Sloan said. “You’re creating things that are going to be on the nontaxable side of the balance sheet when they die.” ...

Residence trusts have a set term after which the property is transferred to a beneficiary. Following that, the Clintons could pay rent to the new owner to continue living in the house, which is another way to move assets outside of the estate.

For the asset to move completely outside the estate, the Clintons would have to outlive the term of the trust. Such trusts typically last for 10 to 15 years to maximize the discount applied to the property’s value. Creating two separate trusts allows the Clintons to spread risk. They can set different lengths for each trust and if one of them dies, the other’s trust wouldn’t be affected.

These moves are “pretty standard” planning for people who know they will be subject to the estate tax, said Ken Brier, an estate tax lawyer in Needham, Massachusetts. “If you’re the Clintons and you live in a fishbowl,” he said, “you’re not going to push the envelope in doing cutting-edge planning.”

There's going to be more and more of this if Clinton runs. Which is one reason that she probably shouldn't.