Sullivan: How Will Japan Pay for a Lower Corporate Rate?

Japanese Prime Minister Shinzo Abe's second term began in December 2012. In the first 12 months, prices on the previously moribund stock market soared 63 percent. In the following six months, they have dropped by 10 percent. ... The rise and fall are largely explained by Abenomics. 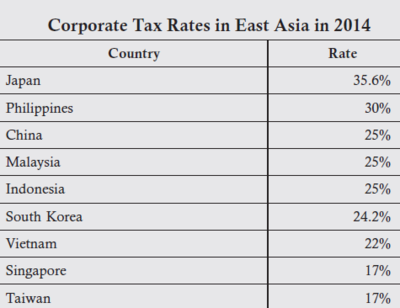 The prime minister's radical break from Japan's previous economic policies has three components, referred to as the three arrows. The first arrow is an enormous expansion of the money supply by the Bank of Japan. The second arrow is a big boost in government spending. By all accounts, both of these measures have been successful in providing short-term stimulus to the economy. ...

But Japan's miraculous made-in-Tokyo recovery is now stalled by a lack of progress on the third arrow of Abe's program: promised but unspecified structural, supply-side reforms like reduced regulation of the labor market, reductions in trade barriers and other protections of favored industries, and a reduction in the corporate tax rate, currently the second highest in the world after the United States. The government's fiscal and economic blueprint, due later this month, is expected to offer proposals on these issues. ...

"From a tax policy point of view, it's better to have a tax system in which footloose corporations are not heavily taxed while individual income and individual consumption should be taxed more," said Bank of Japan Governor Haruhiko Kuroda in a May 24 interview with The Wall Street Journal Japan. Abe's government is clearly following this path. It has a top individual income tax rate of 50.84 percent that applies to taxable income above 18 million yen (about $180,000). Its broad-based consumption tax has a rate of 8 percent, and that will likely increase to 10 percent in October 2015. And if Abe's third arrow hits its target, it is likely that Japan's corporate rate will decline to close to 30 percent over the next few years.

Given these developments in the world's third largest economy, the United States -- with its relatively low income tax rates, its refusal to consider a value added tax, and the world's highest statutory corporate tax rates -- increasingly will find that its tax system puts it at a competitive disadvantage with the rest of the world.

The US has value added taxes. They are called excise taxes for some products and sales taxes when enacted by state legislatures.