Record Numbers of Americans Are Renouncing Their U.S. Citizenship 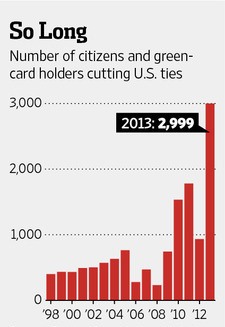 1,001 U.S. citizens and green-card holders had renounced their allegiance in the first three months of the year, according to Andrew Mitchel, a lawyer in Centerbrook, Conn., who analyzes Treasury Department data. That figure puts 2014 on track to top last year's total of 2,999 renunciations, he said, which was the most since the government began disclosing the data.

Helping boost the exodus, experts say, is a five-year-old U.S. campaign to hunt for undeclared accounts held by Americans abroad. Since 2009, the government campaign has collected more than $6 billion in taxes, interest and penalties from more than 43,000 U.S. taxpayers. Federal prosecutors have filed more than 100 criminal indictments, including the high-profile case of Beanie Babies inventor Ty Warner, who last year pleaded guilty to tax evasion involving secret Swiss bank accounts.

The tax dragnet has also swept up many middle-income Americans living abroad, prompting some to give up their U.S. citizenship. While people who renounce aren't freed of taxes due for past years, they don't want to risk sizable taxes and penalties for them and their children in the years ahead, experts say. Nearly 8,000 taxpayers have renounced U.S. citizenship in the past five years, Mr. Mitchel found, compared with fewer than 5,000 in the preceding decade. ...

Mark Mazur, the Treasury Department's assistant secretary for tax policy, said the government's new enforcement was intended to help make sure all taxpayers pay what they owe "regardless of where they live." At the same time, Mr. Mazur said, Treasury needs to "maintain a balance between enforcement efforts and equity, including the burdens that may be placed on taxpayers." Mr. Mazur said Treasury was looking into how best to work with Congress and the IRS to fine-tune the system: "You can always improve."

To CAS: there is an annual exclusion from gross income for "foreign earned income." For 2014 the amount is $99,200, with an accompanying exclusion for qualified housing expenses in a minimum amount of 16% of the foreign earned income exclusion. I've been working in the tax area for a long time and I never had anyone ask me about expatriating -- until a few years ago and one of them has actually done it.

It seems in all fairness to citizens living abroad, there should be some kind of tax deduction for NOT living in the US. After all those living outside the US are not benefiting directly ffom the supposed govt benefits received from tax revenue. They're not using the roads, parks, beaches, security, police protection etc.partially paid for by federal funds. Of course, no one is receiving much benefit from the politician's salaries, bureaucracy waste, corruption... .oops, did I say that?

Most of my friends are leaving the US - sooner or later, too.