The University of Arizona’s law school is turning up the heat on its competitors as demand for traditional law degrees continues to dwindle.

In a second round of tuition-slashing set to take effect this fall, the UA plans to undercut the nonresident tuition rates of more than a dozen peer law schools nationwide by offering steep discounts to students from other states. ...

The change leaves the UA’s law school with the cheapest nonresident tuition rate of its 15 peer schools around the country. Each charges $10,000-$30,000 a year more.

The UA’s new rate also is about 30 percent cheaper than what its sister institution, Arizona State University in Tempe, charges nonresident law students. ASU will charge about $41,700 this fall, nearly $13,000 more than the UA. ...

The UA’s law school was the first in the nation to cut prices, and some are starting to follow suit. The University of Iowa, for example, recently cited the UA’s cuts in a bid to trim its nonresident rates.

At $29,000 annually Arizona Law is among the lowest cost of the nation's top-tier law schools. This tuition is lower than many other state resident tuitions. [Dean Marc] Miller added that he had noted marked interest among prospective law students in California, and expected a higher number of applications in this admissions cycle.

Rationale for request
The drastic nationwide downturn in law school applications and renewed focus on affordability gives us an opportunity to attract additional highly qualified non-resident students by lowering our non-resident cost to more closely reflect what non-resident students pay. Non-resident full costs at $29,000 will place us below – and for the most part substantially below – undiscounted resident (and non-resident) tuition at all of our Western ABOR peer schools. We will continue to provide substantial need and merit-based aid, including a 14% set-aside from differential tuition, albeit less to non-residents and more to residents. Revenue generated from additional students will benefit all students. Overall, we believe that the tuition reduction will improve accessibility and allow our students to graduate with less debt in line with historic public values. 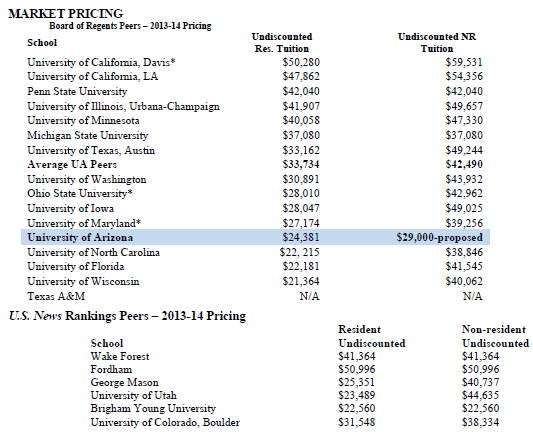 University of Arizona is among several law schools that have sought to lure price-sensitive students amid a national decline in applicants. Penn State Law, Brooklyn Law School, University of Iowa College of Law and University of La Verne College of Law have all slashed their prices in the last year. [But see Public Law School Tuition Cuts Are Less Than Meet the Eye.]

Another school has surveyed the landscape of legal education over the next several years and recognized that, to paraphrase Jimmy McMillan, the tuition was too damn high. Reduce the sticker shock and get a leg up on peer institutions.

Truly noble on the part of Arizona to make itself available to students from outside its borders. Another way to look at it is that panic and the Market have set in and its now a "dog eat dog" world for law schools. An interesting thing about AZ's approach is the identification of a set of "peer" law schools against which it is presumably competing. This recognizes that law schools operate in probably 7 to 9 "qualitative" zones in which they are only competing against other schools similarly situated. AZ's action on out-of-state tuition and applicants means that for many law schools desperation for students is causing the "field" to level out and truly "nationalizing" much of the law school world. Given the significant and continuing decline in law school applications middle-of-the-road schools and the stronger regional schools such as Notre Dame and Northwestern will likely cause quite a few "lesser" schools to shut down because schools like AZ will be drawing applicants away from the "lesser" institutions at an increasingly rapid rate.

1) Depending on their 'scholarships' (discounts), the true tuition rates might not change that much. Given law schools' tendency to play with numbers, the burden of proof is on them for anything.

3) BTW, their median GPA has been climbing, but their LSAT scores have been declining - their median in 2010 was 162; they are now at 160. This suggests to me that they are recruiting from worse undergraduate programs.