The Continuing Debate Over Thomas Piketty's Capital in the 21st Century 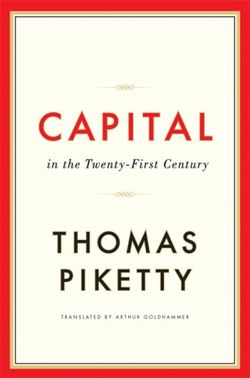 Thomas Piketty has recently attracted widespread attention for his claim that capitalism will now lead inexorably to an increasing inequality of income and wealth unless there are radical changes in taxation. Although his book ... has been praised by those who advocate income redistribution, his thesis rests on a false theory of how wealth evolves in a market economy, a flawed interpretation of U.S. income-tax data, and a misunderstanding of the current nature of household wealth.

New York Times:  To Lift the Poor, You Can’t Avoid Taxing the Rich, by Jared Bernstein (Center on Budget and Policy Priorities):

[T]here are three reliable ways to help or “lift” the bottom: subsidies that increase the poor’s economic security today; investment in their future productivity; and targeted job opportunities at decent wages. ... All of the above — the expanded earned-income tax credit, universal preschool, job-creating infrastructure — will take more tax revenue, and much of that new revenue will need to come from those at the top of the wealth scale.

New York Times:  To Lift Up the Poor, Must We Soak the Rich?, by Ross Douthat:

For a three-idea argument, I suppose it’s appropriate to raise three objections. So here they are:

[S]everal prominent economists are proposing an annual wealth tax, which would apply only to those with assets worth more than a set amount. But there’s limited evidence that wealth inequality has actually worsened in the United States in the last 30 years. And, even if it does eventually get worse, imposing a tax on wealth is a terrible way to promote equality. It actually benefits the super wealthy the most.

Democracy -- A Journal of Ideas:  The Inequality Puzzle, by Lawrence H. Summers (Harvard):

I have serious reservations about Piketty’s theorizing as a guide to understanding the evolution of American inequality. And, as even Piketty himself recognizes, his policy recommendations are unworldly—which could stand in the way of more feasible steps that could make a material difference for the middle class. ...

Piketty argues for an internationally enforced progressive wealth tax, where the rate of tax rises with the level of wealth. This idea has many problems, starting with the fact that it is unimaginable that it will be implemented any time soon. Even with political will, there are many problems of enforcement. How does one value a closely held business? Even if a closely held business could be accurately valued, will its owners be able to generate the liquidity necessary to pay the tax? Won’t each jurisdiction have a tendency to undervalue assets within it as a way of attracting investment? Will a wealth tax encourage unseemly consumption by the wealthy?

You’ll have to wait on my thoughts on the book until they’re a bit more fully formed. As I've been reading, though, I keep returning to a question I heard at an economics conference a couple of months back: If we did implement a wealth tax, should it tax tenure? ...

A few more of interest:

I have to wonder how carefully some of these people (not all of them) have read the Piketty book. The tax proposals are a relatively small part of it, and the analysis is rather richer than some supporters and critics claim. More later.