Rob Lowe on Sending His Son Off to College

Slate:  Rob Lowe on Sending His Son Off to College: 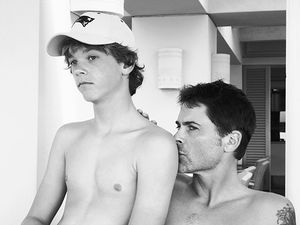 I’m trying to remember when I felt like this before. Like an el­ephant is sitting on my chest, like my throat is so tight and constricted that I can feel its tendons, like my eyes are 100 percent water, spilling out at will, down pathways on my face that have been dry for as long as I can think of. I’m trying to remember: When was the last time my heart was breaking? ...

When I was a boy, I had to leave my friends in the summer, just as Malibu was becoming Malibu, say goodbye to my first girlfriend and go to Ohio to stay with my dad. There is a little of that sense memory at play too, a feeling that I’m about to be left out of important events, separated from life as I know it, the world as I love it. ...

Today is my son Matthew’s last night home before college.

Through the grief I feel a rising embarrassment. “Jesus Christ, pull yourself together, man!” I tell myself. There are parents sending their kids off to battle zones, or putting them into rehabs and many other more legitimately emotional situations, all over our country. How dare I feel so shattered? What the hell is going on?

One of the great gifts of my life has been having my two boys and, through them, exploring the mysterious, complicated and charged relationship between fathers and sons. As I try to raise them, I discover the depth and currents of not only our relationship but ones already downstream, the love and loss that flowed between my father and me and how that bond is so powerful.

Now, standing among the accumulation of the life of a little boy he no longer is, I look at my own young doppelgänger and realize: it’s me who has become a boy again. All my heavy-chested sadness, loss and longing to hold on to things as they used to be are back, sweeping over me as they did when I was a child.

In front of Matthew I’m doing some of the best acting of my ca­reer. I’ve said before that the common perception that all good actors should be good liars is exactly the opposite; only bad actors lie when they act. But now I’m using the tricks of every hack and presenting a dishonest front to my son and wife. To my surprise, it appears to be working. I smile like a jack-o’-lantern and affect a breezy, casual man­ner. Positive sentences only and nothing but enthusiasm framing my answers to Matthew’s questions.

The clothes are off the bed and zipped into the bags. The bed is tidy and spare; it already has the feel of a guest bed, which, I realize to my horror, it will become. I replay wrapping him in his favorite blan­ket like a burrito. This was our nightly ritual until the night he said in an offhanded way, “Daddy, I don’t think I need blanky tonight.” (And I thought that was a tough evening!)

I think of all the times we lay among the covers reading, first me to him, Goodnight Moon and The Giving Tree, and later him to me: my lines from The West Wing or a movie I was shooting. The countless hours of the History Channel and Deadliest Catch; the quiet sanctu­ary where I could sneak in and grab some shut-eye with him when I had an early call time on set, while the rest of the house was still bustling. I look at the bed and think of all the recent times when I was annoyed at how late he was sleeping. I’ll never have to worry about that again, I realize. I make up an excuse to leave the room and head to my secret corner. ...

I’m surprised at how little we say to each other, and how good that feels. There is nothing we are withholding and I know that our “being current” with each other, as the shrinks would say, is a result of years spent in each other’s company. Not just dinner or good-nights or drop-offs; it’s time coaching his teams, being in the stands, on fishing boats, in the water surfing or diving, watching stupid television, being home on nights when he is with his friends and talking smack with them, standing up to and getting in the face of teachers, parents, other kids or anyone who so much as thought about treating him badly.

We put in the time together; we built this thing we have of com­fort and love. And now, as we both prepare to let go of each other, it is paying off.

I recounted my similar feelings five years ago in A Bittersweet Day.