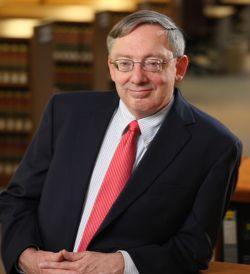 University of Virginia legal scholar Douglas Laycock is facing criticism from gay rights groups for his support of religious freedom laws that activists say could lead to discrimination against the lesbian, gay, bisexual and transgender community. Activists also are upset at his support for Hobby Lobby in an ongoing Supreme Court case involving contraception coverage.

Laycock, who is married to UVa President Teresa A. Sullivan, is the subject of a Freedom of Information Act records request by two UVa student activists — Gregory Lewis and Stephanie Montenegro. In an open letter to the professor, Lewis and Montenegro said that while they respect Laycock’s right to academic freedom, they believe his writings supporting controversial religious freedom laws are holding back progressive causes such as access to contraceptives and gay marriage. ...

“As leaders on the UVa campus, we strongly believe in engaging in dialogue, and, equally as important, for professors to truly understand the implications of their work,” the letter continues.

Commentators across the ideological spectrum have condemned the actions of the UVa law students:

Stephen Bainbridge (UCLA), The Purge Arrives at the University of Virginia: PC Thugs versus Douglas Laycock:

Bullshit. You don't start a dialogue with FOIA requests. This is a blatant effort at deterring public participation by anyone who does not hew 100% to the most radical version of the gay rights movement.

“I think it would be really constructive for him to hear how his work is being used to hurt the LGBTQ community,” said [the student]. “I don’t think he has any ill intent. I think he’s very thoughtful and moderate, and willing to hear both sides. But I think that everyone really has a lot to learn.”

My God. The pomposity and arrogance of these children (of the corn?) is just amazing. It's time to start fighting back. There have to be consequences for people like [them] or the day will come when they and their ilk will have successfully silenced the rest of us.

Douglas Laycock (Virginia) is, I would agree, on the wrong side of a number of recent religious liberty issues in both his advocacy and in his scholarship, but students requesting his e-mails are engaged in harassment and intimidation that infringe upon his academic freedom.  Cut it out, kids!  No good will come of this kind of mischief.

No one could doubt that Laycock’s views on religious accommodation are part of a set of intellectually derived convictions that run through decades of his work. (In addition to opposing such forms of church-state entanglement as officially sponsored prayer, he supports the right of gays to marry.) It’s simply a matter of trying to arm-twist a tenured, well-recognized scholar who takes a position that the Forces of Unanimity consider wrong. ...

It might also be time for legislators to clarify state open-records laws to determine under what circumstances they can be used to go after academics, and consider altering them, where appropriate, to provide for financial or other sanctions when they are misused.

It's important to remember the names of Gregory Lewis and Stephanie Montenegro. If they apply for a job with you or your firm or school, it's especially important, because it's clear they are not ethically fit to practice or teach law.

A scholar's published works are his record. there should be no need to go for emails etc. except in very unusual circumstances, the kind that almost never arise. this is pure bullying.

"Isn't this exactly the same thing they are doing?"

No. Next question, or do you need further explanation of the obvious?

Well then, MIke, perhaps conservatives should finally begin to seriously push back with the sleazy, vicious and despicable Alinskyite intimidation tactics used by the "progressives" to attack them for over 50 years. Don't you agree? (That's rhetorical; the answer is obvious.)

The first thing to do is to form a 501c3 and a related 501c4 (to properly muddy the waters about funding and political activity). Its formal public mission statement would be to become a "Web-based, not-for-profit, conservative research and information center dedicated to comprehensively monitoring, analyzing, and correcting liberal/leftwing/progressive misinformation in the U.S. media." Its first action should be to submit FOIA requests for all the emails of the tens of thousands of leftist/Marxist professors in every university that gets a dime of federal money.

By the way, that mission statement is taken directly from the slimey MediaMatters website, with the ideologies reversed. George Soros is its main donor.

The Obama administration treats FOIA requests as a joke, just another stalling tactic. First it illegally ignores them for a year or more, then once a court order is issued, submits several truckloads of mostly irrelevant documents with heavy redaction of all the important data. If that fails, then Obama claims executive privilege in novel ways.

The successful silencing of groups have never ended well. It has always resulted in physical violence. Is this really where the LGBT groups want to go?

Gregory Lewis and Stephanie Montenegro are pious (Prius?) hypocrites. While they "respect academic freedom," their actions indicate they do not.

It is also obvious that Lewis and Montenegro cannot refute Professor Laycock's arguments, so they've decided to undermine the man himself.

If Lewis and Montenegro are products of the University of Virginia's education system, it is a black mark on the university.

Mike, "Freedom Of Information Act requests should not be judged by the politics of the requestor. If the professor's email is from a public account, it should be released, regardless of the intent of the requestor." Fine, let's see all the White House staff's e-mails while we're at it. And why stop at e-mails? How about college applications, transcripts, and canceled tuition checks of a certain someone in high office?

Is this pressure group tactics? Possibly/probably.

*But* - if you work for a *public* institution and get paid with *taxpayer* dollars, then "your" emails should be open to the public.

I hear a *lot* of squawking from very well compensationed "professionals" who want to feed at the public trough and then tell the public to p*ss off.

There was a time when law students understood that future employers wouldn't look kindly on them spending their academic careers publicly acting like fools and harassing their professors and colleagues.

Classes not engaging enough?
Bad parenting?
Too much Progressive programing in class.
Because if one were to look up the definition of :"Liberal" this behavior is as far from Liberal as it gets, it's much closer to Fascism.

Academe's mission is to take students & turn them into 'activists.'

Step 1: "The purpose of college is to take a high school graduate who's sure of himself and make him confused" (professor at Kent State University)

Step 2: Proceed to do precisely that.

"Because of the finite speed of light no object has an instantaneous
existence...In order for an object to be totally present at a given instant of time, instantaneous communication would be required. Since that is impossible, all parts of an object exist in the past of every other part. Our present does not exist..." (College Physics Textbook)

"History is made by the historian. Each generation of historians reinterprets the past in light of its own historical experience and values. There can be no definite history of Alexander and no one historical truth about the fall of the Roman Empire" (History course description, Univ. of Indiana at Bloomington).

"Text meanings arise from ... bring[ing] varying viewpoints and subjective readings of the text into the [group] discussion...[then] within the classroom forum, each perspective receives due attention. As meanings are debated ... they become part of the "community's intersubjective meaning of the text." Source of authority can...
include the author...the teacher…and the student...One is not to be a measuring stick against which [the] others are [to be] judged" (Ruddell, Robert B. and Norman J. Unrau. "Interpreting texts in classroom contexts." Journal of Adolescent & Adult Literacy, September 1995: ppg. 16-26. Florida State University College of Education course, "Problems and Trends in Secondary English Curriculum").

"Learning to spell should ultimately be as...unconscious...as learning to speak" and the curriculum of spelling should be shifted from "a focus on error to a focus on creation" (Dr. Sandra Wilde, University of Nevada at Reno, defending her "curriculum" (dogma?) of invented spelling).

"Purism...in any field (including language matters) is based on sadism...the desire to force one's will on others" (Professor of linguistics, Cornell University.

Step 3: Teach the teachers that reality is a product of the collective minds of mankind.

"The group exists before the individual. A person does not create his or her own social group; rather, in an important sense, the group creates the individual ... It is the set of minds that comprise human society that collectively constitute the "reality" in which each must have one's own human existence (standard school of education textbook: Leeds-Hurwitz, Wendy. Communication in Everyday Life. New Jersey: Ablex, 1989).

Step 4: Make people believe a college education is about education, rather than indoctrination. Tell them: "A mind is a terrible thing to waste."

Step 5: Sit back, have a latte and let the chaos ensue.

Freedom Of Information Act requests should not be judged by the politics of the requestor. If the professor's email is from a public account, it should be released, regardless of the intent of the requestor.

The gaystapo will not stop until every last one of us gives up GOD and bows to them. Like that is EVER going to happen

A 'dialogue'... what a joke. I just came from an Instapundit link where the dialogue is between gun-control advocates and 'gun nuts'. As Andrew Klavin will tell us, 'dialogue' means SHUT UP!

Who decides which FOIA has merit and which do not?

The climate change fanatics would love such a rule...

If your emails are subject to FOIAs, compose them accordingly.

Moreover, what is not to like about having the very audience that needs education assemble voluntarily, eager for input from the horses' mouth?

This is an opportunity not to be missed, go and use it for proper pushback

Micheal Mann"s UVA emails are privledged, and
protected from FoIA requests so Prof Laycock's emails should be protected as well.
Right?

"There have to be consequences for people like [them] or the day will come when they and their ilk will have successfully silenced the rest of us."

Isn't this exactly the same thing they are doing? Trying to silence their opposition? We don't want to silence them, because free speech is an important freedom. What we want is their strident vocalizations and meager scriblings to be so marginalized that nobody pays them any attention, as it should be. But silenced? No...if you're willing to silence one POV, arbitrarily, where does it stop?

This is terrible. UVA students should be ashamed.