Ivory Tower: Is College Worth the Cost? 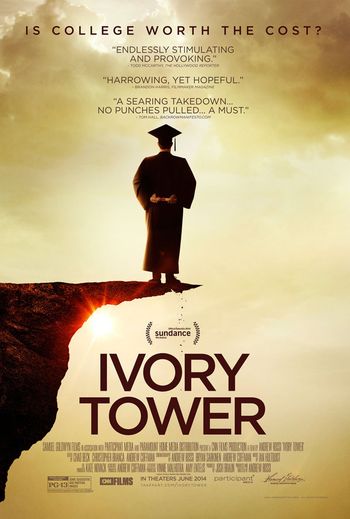 The word “crisis” pops up frequently in Ivory Tower, a compelling new documentary about the state of higher education in America.

And “crisis” isn’t even their direst appellation. Andrew Delbanco, a Columbia University professor of American studies who functions as the movie’s conscience, notes an “apocalyptic dimension” to today’s discussion of college’s failings. The movie is set on verdant campuses. It’s rife with lecterns, books and graduation gowns. And yet it’s a kind of horror story.

Scheduled for theatrical release next month, Ivory Tower does an astonishingly thorough tour of the university landscape in a brisk 90 minutes, touching on the major changes and challenges, each of which could sustain its own documentary.

But as I watched it, one theme in particular kept capturing my attention. One set of questions kept coming to mind. How does our current system of higher education square with our concerns about social mobility? What place do the nation’s universities have in our intensifying debate about income inequality? What promise do they hold for lessening it?

The answers in “Ivory Tower” and beyond it aren’t reassuring. Indeed, the greatest crisis may be that while college supposedly represents one of the surest ladders to, and up through, the middle class, it’s not functioning that way, at least not very well.

New York Times Magazine, Who Gets to Graduate?:

When you look at the national statistics on college graduation rates, there are two big trends that stand out right away. The first is that there are a whole lot of students who make it to college — who show up on campus and enroll in classes — but never get their degrees. More than 40 percent of American students who start at four-year colleges haven’t earned a degree after six years. If you include community-college students in the tabulation, the dropout rate is more than half, worse than any other country except Hungary.

The second trend is that whether a student graduates or not seems to depend today almost entirely on just one factor — how much money his or her parents make. To put it in blunt terms: Rich kids graduate; poor and working-class kids don’t. Or to put it more statistically: About a quarter of college freshmen born into the bottom half of the income distribution will manage to collect a bachelor’s degree by age 24, while almost 90 percent of freshmen born into families in the top income quartile will go on to finish their degree.

When you read about those gaps, you might assume that they mostly have to do with ability. Rich kids do better on the SAT, so of course they do better in college. But ability turns out to be a relatively minor factor behind this divide. If you compare college students with the same standardized-test scores who come from different family backgrounds, you find that their educational outcomes reflect their parents’ income, not their test scores. 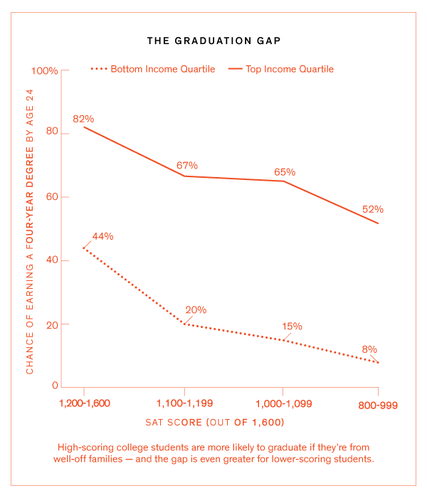