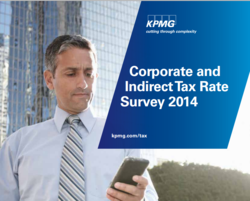 The proposed takeover of UK-listed drug group AstraZeneca by Pfizer of the US has reignited the debate over tax competition between countries.

A study by KPMG, the professional services group, published last week found that nearly one in six countries had cut their corporate tax rates over the past 15 months, but that the size of the cuts was smaller than in the past. [Corporate and Indirect Tax Rate Survey 2014]

Commenting on the report, Chris Morgan, a partner at KPMG, said rates appeared to be levelling off, marking an end to what economists have described as the ‘race to the bottom’ on corporate tax. “There is a natural level below which they are not going to fall below, which appears to be around 20 per cent.” 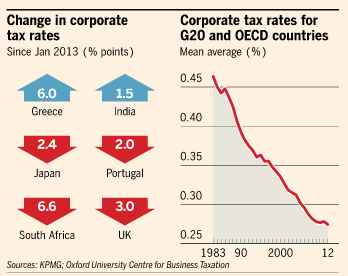 The article title indicates a clear bias in favor of the corporate income tax. Given that many companies are already functioning as flow-through entities and are already subject to only one layer of taxation, it is by no means a foregone conclusion that eliminating the corporate income tax altogether in favor of a flow through system would be a "race to the bottom," much less reducing the tax rate.

I thought competition was good? It produces choice, innovation and affordabilty for consumers (i.e., all of us). Collusion between producers reduces the need to invest in consumer-beneficial innovation, permits monopoly pricing (i.e., extracting rents from consumers), and generally results in priviliged insiders sucking up vast wealth from consumers and distributing amongst their venal selves. That generally describes government as well as established market producers.