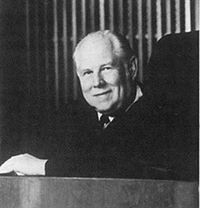 William Judson Holloway, Jr., former Chief Judge of the U.S. Court of Appeals for the Tenth Circuit, died this morning surrounded by his family.

Judge Holloway's family moved to Oklahoma City in 1927, where he received his elementary education in the Oklahoma City public schools, graduating from Classen High School in 1941. He attended the University of Oklahoma for two years before World War II and for one year after serving in the United States Army, receiving his B.A. from the University in 1947. He received his LL.B. from Harvard Law School in 1950.

After being in general practice with his father and uncle in Oklahoma City, he served as an attorney in the Department of Justice in Washington, D.C., in 1951 and 1952. He then returned to general practice in Oklahoma City until his appointment by President Johnson as a United States Circuit Judge of the Tenth Circuit on September 16, 1968. He served as Chief Judge of the Tenth Circuit from September 1984 until September 1991 and assumed senior status in 1992.

Judge Holloway altered the trajectory of my life.  When I was applying for judicial clerkships, my Cornell friend and classmate Richard Paar, who was from Oklahoma City, suggested that I apply to clerk in Judge Holloway's chambers.  I got the job, packed up my Honda Civic in August 1983 and made the 1,700 mile trek from Massachusetts to Oklahoma to begin my post law school life.  Judge Holloway was an ideal mentor, modeling genuine kindness (to everyone), a prodigious work ethic (which included feeding his clerks hot dogs and Twinkies on Saturdays in the office), and a deep love for his family.  He graciously indulged my fantasy of becoming a law professor someday by allowing me to write three articles and teach on an adjunct basis at Oklahoma City University School of Law and the University of Oklahoma College of Law during my clerkship.

I dated my co-clerk, Courtney Bryan, and Judge Holloway looked the other way until we announced at the end of our clerkship that we were getting married.  He helped us land our jobs in Boston and later in Cincinnati.  We kept in touch through the years, including on April 19, 1995 when Judge Holloway was working in his chambers across the street from the Alfred P. Murrah Federal Building.

Courtney and I frequently marvel at the fates that brought us together in Oklahoma City and now have us living next door to my Dean and Judge Holloway's former Tenth Circuit colleague, Deanell Tacha.  Last month, we reconnected with our former co-clerk Steve Garrett, who came to Malibu on a college tour with his daughter.  We had dinner together and spoke long into the night about how our time with Judge Holloway had launched us into our professional lives.  We regaled ourselves (and bored Steve's daughter) with tales of our clerkships -- including the time the Judge called Steve and me into his office to speak with a FBI agent (that's a long story!).

We learned much about the law and even more about life clerking for Judge Holloway.  We will always be grateful for the opportunity to work for and get to know this man who "lived greatly in the law" (Oliver Wendell Holmes).

Paul,
I also clerked for Judge Holloway and I want to add my thanks for your wonderful tribute. The “Judge” was a great mentor and friend who never stopped being concerned about his law clerks. His kindness and broad smile will be an enduring memory for me and my family.

Thank you, Paul, for a wonderful tribute. I clerked for Judge Holloway in 1994-96, and by fate, drove him home the day of the bombing (his car was inaccessible as it was in the garage under the courthouse, which the FBI had cordoned off). True to form, we were back in chambers three days later, a Saturday, complete with lunch provided by the Judge. His dedication was unmatched. Or perhaps matched only by his own humility and kindness. He will be sorely missed, but will be revered and remembered with unbridled affection by all who knew him. I'm very sad about his passing, but eternally grateful for having him as a mentor and friend. He is a hero to me.

I have lost a great friend and colleague who taught me much. Thanks, Paul, for this beautiful tribute.

If there were a like button, I'd click it, not that Judge Holloway is gone, but for your very wonderful tribute.