Today is Tax Freedom Day, the day on which Americans will have earned enough money to pay all federal, state, and local taxes for the year:

Tax Freedom Day is the day when the nation as a whole has earned enough money to pay its total tax bill for year. A vivid, calendar-based illustration of the cost of government, Tax Freedom Day divides all federal, state, and local taxes by the nation’s income. In 2014, Americans will pay $3.0 trillion in federal taxes and $1.5 trillion in state taxes, for a total tax bill of $4.5 trillion, or 30.2 percent of income. This year, Tax Freedom Day falls on April 21, or 111 days into the year. Tax Freedom Day is three days later than last year due mainly to the country’s continued slow economic recovery, which is expected to boost tax revenue especially from the corporate, payroll, and individual income tax.

The total tax burden borne by residents of different states varies considerably due to differing state tax policies and because of the progressivity of the federal tax system. This means a combination of higher-income and higher-tax states celebrate Tax Freedom Day later: Connecticut (May 9), New Jersey (May 9), and New York (May 4). Residents of Louisiana will bear the lowest average tax burden in 2014, with Tax Freedom Day arriving for them on March 30. Also early are Mississippi (April 2) and South Dakota (April 4). 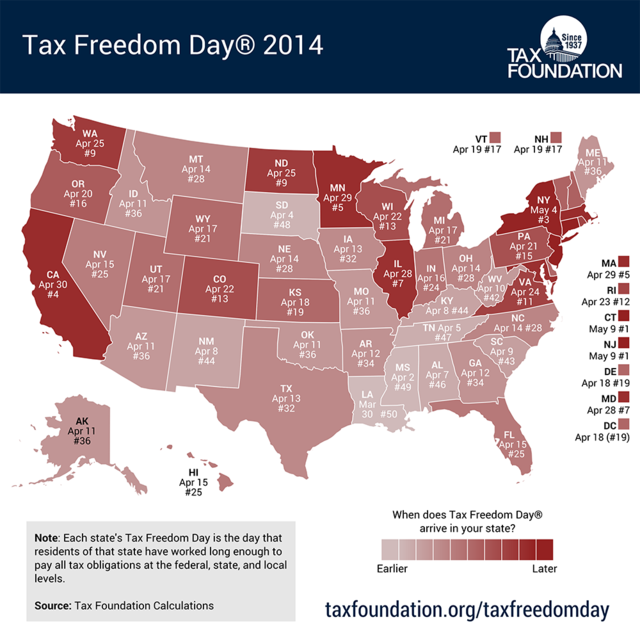