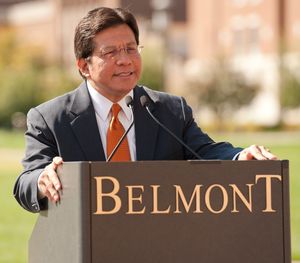 Judge Gonzales joined Belmont Law in 2012 as the then-newly established Doyle Rogers Distinguished Chair of Law and has taught courses in Constitutional Law, Separation of Powers, National Security Law and First Amendment Law. His appointment to dean was approved by the College of Law faculty prior to the announcement. As dean Gonzales will serve as the chief academic and executive officer for Belmont’s College of Law and will be responsible for the programmatic leadership, financial management, personnel administration and planning and development for the College.

After attending the United States Air Force Academy, Alberto Gonzales graduated from Rice University (B.A.) and Harvard University (J.D.). Gonzales was nominated by President George W. Bush and confirmed by the United States Senate as the 80th Attorney General of the United States on February 3, 2005 and served in that capacity until September 2007. Previously, he served as a partner at a major Houston law firm (Vinson & Elkins) and held positions as Justice on the Supreme Court of Texas, Secretary of State (Texas) and Counsel to the President of the United States (2001-2005) in addition to his consulting and mediation practice.

During his time in Nashville, Judge Gonzales has also served as counsel at Waller, a position he will resign to focus full-time on the College of Law.

JMs answer was opinionated and not supported by basic facts. Belmomt, in it's infancy, without a bar pass, still ranked 95 out of 102. This is higher than any new law school has done in 35 years. In addition, this exact blog ranked Belmont Law #5 law school in the mid-south trailing Vandy, Duke, Emory, and Wake Forrest, all of which are all notable schools. Their accomplishments should be commended, not criticized.

The class size is purposefully low. 120 members in the charter class and they have had more applications every year but make the class size smaller to keep LSAT and GPA competitive.

"The guy gave up great career options to land at the helm of a school that has a terrible future, and will probably close in the next 3-5 years."

Why do you think this? Nothing about Belmont's numbers seem to indicate that as a possibility (except that their class size may be a little small - though its hard to know how much of that is planned or not).

maybe because he is a war criminal and no one else will have him?

This makes no sense at all. The guy gave up great career options to land at the helm of a school that has a terrible future, and will probably close in the next 3-5 years. Where will he go after that? Hope he invests his salary wisely.