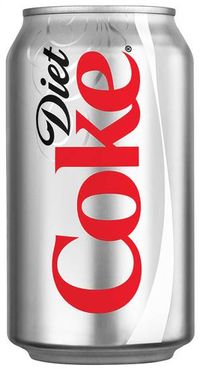 After many years of nagging encouragement by my wife, I have reduced my Diet Coke consumption by 75%, and am well on the way toward my 100% goal.  I did not realize the full impact of my decision:

Wall Street Journal, The Diet Soda Business Is in Freefall:

The drop-off is a mounting problem for industry giants Coca-Cola, PepsiCo and Dr Pepper Snapple Group, which have long depended on zero-calorie sodas to make up the difference as Americans became increasingly concerned about the health effects of sugared drinks.

Overall soda volumes fell an estimated 3% in 2013, the ninth straight yearly contraction and more than double the 1.2% decline in 2012, according to Beverage Digest. ...

Sales volumes of full-calorie Coke, the top-selling U.S. soda, slipped 0.5% last year but Diet Coke plunged 6.8%, according to Beverage Digest. ... Coca-Cola Co., whose soda brands also include Sprite and Fanta, increased its market share of U.S. carbonated soft drinks to 42.4% from 42.0% in 2012, according to Beverage Digest. PepsiCo, which also counts Mountain Dew among its brands, slipped to 27.7% from 28.1%. Dr Pepper Snapple's share inched up to 16.9% from 16.8%.

Beverage giant Coke is far more exposed to soda than chief rival PepsiCo, which also has a huge snacks business. About 60% of Coke's U.S. revenue comes from soda, compared with roughly 25% at PepsiCo. The bulk of Dr Pepper's sales are also tied to soda. 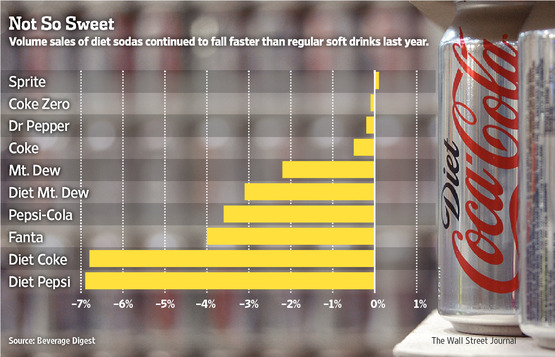 When I gave up Budweiser 13+ years ago, I ramped up my Diet Coke consumption to 6 or 8 cans a day. Now I'm down to just 2 or 3. But I always make sure to drive carefully when I pass a Diet Coke truck on the road -- don't want to crash the truck and waste the precious cargo!

R U srsly saying artifuctal sugs is bettrs dan real sugs. Dats how de idgits washed ur brain from T.V.'s. Go back to wathcin' Sienfelds an drinkin dt. sodaz. Made wit real sugs is the way to go. But duznt give u de canzers so u won't drinkz it so ur frenz will feels sowy 4 u.

There is no sugar in any of these soft drinks. High fructose corn syrup perhaps, but no sugar.

HFCS is sugar, chemically and by any other rational criteria. Believing otherwise is foolish and anti-science.

I've switched, as much as possible, to Pepsi Throwback. No HFCS in there... it's the Pepsi I grew up with.

But what about 7-Up?

"Iced tea is working out much better, no weird chemicals and cheaper as well. You do have to boil lots of water, however."

Has anyone tried Zevia (it's sweetened with Stevia) or liquid water enhancers that use it? It's kind of a middleground between HFCS sweetened drinks and gross aspartane-sweetened chemical-aftertaste of diet soda.

Personally I prefer cane-sugar sodas for taste, but the Stevia stuff isn't too bad.

I'm also curious what these "flavor enhancers" are doing to the soft drink market. I use the crap out of them and as a result drink far less soda. My worry is they're as bad for me as soda since they use the same artificial sweeteners, but sweet tooth must be fed...

ust thought it may need pointing out to "Earnest Jack" that Dihydrogen monoxide.is simple water and the name is/was part of an april fools hoax.it is just another way of saying H2O

People looked around and noticed the FATTEST people all drank Diet Soda's. It doesnt take a rocket scientist. I switched to 90% fresh water a decade ago and couldnt be happier.

What MEC2 said. Can't believe the author didn't look at the chart and have the Coke Zero numbers jump right out at them, let alone not mention it at all in an article about Diet Coke. Diet Coke is based on New Coke, which was a resounding flop, and now that people have a choice for a diet version of "real" Coke, it makes sense that they are abandoning Diet Coke in droves. I left Diet Coke behind at my first taste of Coke Zero.

The huge increase in price is a factor as well. I used to buy soda regularly but now only do when it is on sale before the holidays or before the Super Bowl.

"Water is... free of chemicals"
Most supplies have been heavily contaminated with Dihydrogen monoxide. I believe big oil uses DMHO in their fracking operations, and this may be where the contamination sprang from.

Forget Coke & Pepsi! It's not hard to find retro-style soft drinks that use cane sugar instead of HFCS. Triple Cola is highly recommended!

There is no sugar in any of these soft drinks. High fructose corn syrup perhaps, but no sugar.

"Water is free and free of chemicals."

Ummm.... Water is a chemical. But you say, Water isn't a harmful chemical! I would assume that more people drown in water than in any other chemical... Also if you drink to much you can get water poisoning.

Most of the anti soda / diet soda stuff has no science to back it up...
Caffeine is, generally, good for you once you've built a tolerance...

I think that their sales are dropping because their prices are too high. There is a new PC thing, that everyone you should drink water or fruit juice only.

The only diet drink I can stand is A&W Diet Root Beer. And then I drink only about 2 per month.

This is simple economics. The **brande**d soft drinks have pushed prices up close to 20%, so people like me drink as much as ever- but now cheaper, eg, Walmart sodas. I buy Diet Dr Pepper when it is on sale for 30% or more off. Otherwise I buy Walmart's Diet Dr Thunder.

While soda sales are declining overall, part of the large drop in Diet Pepsi and Diet Coke is the migration to Coke Zero, which is better tasting than both. There is a reason Coke Zero saw little to no decline - preference migration from other diet sodas.

I used to be Coca-Cola junkie, then a Diet Coca-Cola junkie. Iced tea is working out much better, no weird chemicals and cheaper as well. You do have to boil lots of water, however.

The problem there is that you can buy iced tea in bulk - but it is hard to find regular, unsweetened ice tea by the gallon or liter, at a price even close to that of soft drinks. Naturally or artificially sweetened iced tea? Fine. But I gave that up maybe 50 years ago.

I was never a pop junkie, but I, too, have switched to ice tea since I wanted to get away from HFCS and control how surgery my drinks are. I use the unsweetened powder, though, and add a dash of Koolaid powder when I want a slight orange, grape, or black cherry flavor.

No one mentioned what is probably a significant factor. Two words: Soda Stream

No why? I want to know why consumption is falling!

I'll second the vote for iced tea. Cheapest tea bags make the best tea, too (because they're lower in tannins, and tannins make tea cloudy).

Free of chemicals? Do you know what chemicals are? For something to be free of chemicals also means it's free of existence. What exactly do you think sugar is? I'll give you a hint, if you mix it with spice and everything nice, it does not in fact create a girl.

You must mean it is free of other chemicals.

I used to drink a 2 liter bottle of Diet Pepsi every day. Now I have one 16 oz. in the morning while driving to work (I don't drink coffee) and then have unsweetened iced tea, that I make myself in a wonderful Mr. Coffee ice tea maker, the rest of the day and into the evening. Best move I ever made.

You know if you put enough Bacardi in that stuff you don't notice the aftertaste at all.

I used to be Coca-Cola junkie, then a Diet Coca-Cola junkie. Iced tea is working out much better, no weird chemicals and cheaper as well. You do have to boil lots of water, however.

Anything wrong with moderation? I enjoy my diet soda. Doesn't mean I drink it multiple times a day or even every day. I have it occasionally, maybe once a week. But people think they need to go cold turkey and totally remove it from their lives. How about enjoy the stuff you like in moderation and keep an eye on your health? Not very complicated.

Water is "free of chemicals"? How do you know?

Plus, research is finding that the body reacts to diet drinks (with insulin production) the same way the body reacts to sugar, so much of the 'zero calorie' benefit isn't there anyway. Plus, aftertaste. I switched to club soda years ago. Need that fizz...

Water is free and free of chemicals. I do miss my Diet Pepsi, though. And Tab.

My wife has given up Diet Coke multiple times. I applaud her for trying and you as well. Good luck!

But the "healthy" juices are loaded with sugar which is worse for most people than anything in Diet Coke.